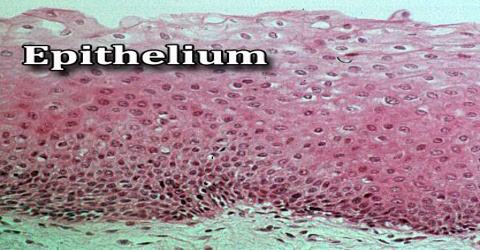 Epithelium is the thin, membranous tissue that lines most of the internal and external surfaces of an animal’s body. It is composed of one or more layers of densely packed cells. In vertebrates, it lines the outer layer of the skin (epidermis), the surface of most body cavities, and the lumen of fluid-filled organs, such as the gut or intestine. It is one of the four main tissue types in the body, along with muscle, connective tissue, and nervous tissue. Epithelial tissue has many functions, including protection, secretion, selective absorption, excretion, diffusion, and sensation. It functions mainly to line surfaces in the body, and lies on top of connective tissue, to which it is anchored by a basement membrane consisting mainly of collagen fibers. Glands are also composed of epithelial tissue. Simple Epithelia– It consists of a single cell layer found where absorption, secretion, and filtration occur. Simple cuboidal epithelial tissue is often found in tissues specialized for secretion or absorption, such as glands. Simple columnar epithelium lines parts of the female reproductive system and much of the digestive system, including the stomach and intestines.

Stratified Epithelia– are composed of two or more cell layers stacked on top of each other, typically found in high abrasion areas where protection is needed.

Structure and Functions of Epithelium

Epithelial tissue has differently shaped bricks – or cells, that is. There are columnar cells, which mean ‘column-like cells’; cuboidal cells, which are cube-like cells; and squamous cells, which are flattened and scale-like cells. Basically, columnar cells are much higher than they are wide, cuboidal cells look like squares, and squamous cells are flat like turtles and therefore not very tall at all. Epithelial tissue has a nerve supply, but no blood supply and must be nourished by substances diffusing from the blood vessels in the underlying tissue. The basement membrane acts as a selectively permeable membrane that determines which substances will be able to enter the epithelium. Cilla are motile structures that have a characteristic structure of microtubules with 9 doublets surrounding two central singlets to form an axoneme. Dynein arms with ATPase activity attach to the microtubules to power movement. Terminal bars at the apical region of epithelial cells represent junctional complexes with several components. “Tight junctions” or zonula occludens form an impenetrable barrier between cells.

Gland structure can be simple or complex. The goblet cells of the gastrointestinal tract are unicellular mucinous glands. Multicellular glands can be tubular, such as those in the gastric mucosa or colon, or acinar, such as those around a central lumen in the pancreas.

Epithelial tissues have as their primary functions:

Glands are composed of collections of specialized epithelial cells that secrete one or more substances.