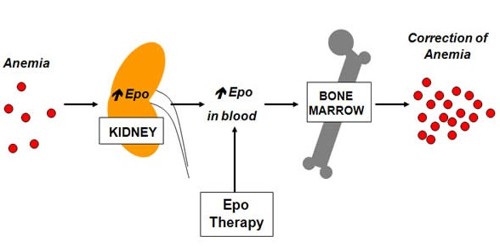 Erythropoietin, or Erythropoetin (EPO) is a hormone produced by the kidneys. Epoetin is a synthetic version. It plays a key role in the production of red blood cells (RBCs), which carry oxygen from the lungs to the rest of the body. It is also called haematopoietin or haemopoietin, but these names are rarely used today.

Erythropoietin acts on the bone marrow so that it makes more red blood cells. This test measures the amount of erythropoietin in the blood. It is used to treat some kinds of anemia. It can be synthesized and used as a treatment of some forms of anemia. Anemia can happen in kidney failure, or from chemotherapy to treat cancer. The man-made hormone is made with cell cultures.  If this is the case, the person may have to have a blood transfusion to treat this type of anemia. The hormone can be used for blood doping in endurance sports although this is illegal in all athletic competitions. As the prime regulator of red cell production, erythropoietin’s major functions are to:

It is produced and released into the blood by the kidneys in response to low blood oxygen levels (hypoxemia). These cells make and release erythropoietin when the oxygen level is too low. Having more red blood cells raises your hemoglobin levels. Hemoglobin is the protein in red blood cells that helps blood carry oxygen throughout the body. It is also responsible for inhibiting the body process “Gluconeogenesis” (a process in your body which makes glucose from products other than carbohydrates), thus contributing to curing of type2 diabetes, glucose intolerance.