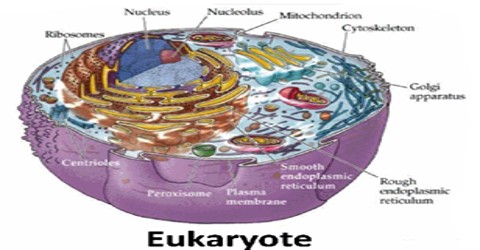 Eukaryote is any member of the Eukarya, a domain of organisms having cells each with a distinct nucleus within which the genetic material is contained. Eukaryotes include protoctists, fungi, plants, and animals Compare prokaryote. The eukaryotic cell has a nuclear membrane that surrounds the nucleus, in which the well-defined chromosomes are located. Eukaryotic cells also contain organelles, including mitochondria, cellular energy exchangers, a Golgi apparatus, an endoplasmic reticulum, a canal-like system of membranes within the cell, and lysosomes which is digestive apparatus within many cell types. Structure and Function of Eukaryotic Cell In humans, for example, have trillions of bacteria living in our colons, not to mention in our mouths and stomachs and small intestines. Despite the fact that we have gobs of prokaryotic cells living inside and on us, humans are still categorically eukaryotic organisms. Deal with it. This means that all human cells, including those found in the brain, the heart, the muscles, and so on, are also eukaryotic. The origin of the eukaryotic cell was a milestone in the evolution of life. Although eukaryotes use the same genetic code and metabolic processes as prokaryotes, their higher level of organizational complexity has permitted the development of truly multicellular organisms. Without eukaryotes, the world would lack mammals, birds, fish, invertebrates, mushrooms, plants, and complex single-celled organisms.

Here are some examples of eukaryotes:

Most plants, animals, and fungi are composed of many cells and are, for that reason, aptly classified as multicellular, while most protists consist of a single cell and are classified as unicellular. The various single-cell eukaryotes were originally placed with plants or animals when they became known. In 1830, the German biologist Georg A. Goldfuss coined the word protozoa to refer to organisms such as ciliates, and this group was expanded until it encompassed all single-celled eukaryotes, and given their own kingdom, the Protista, by Ernst Haeckel in 1866. The eukaryotes thus came to be composed of four kingdoms:

There are also smaller groups of eukaryotes whose position are uncertain or seem to fall outside the major groups. In particular, Haptophyta, Cryptophyta, Centrohelida, Telonemia, Picozoa, Apusomonadida, Ancyromonadida, Breviatea, and the genus Collodictyon. Overall, it seems that, although progress has been made, there are still very significant uncertainties in the evolutionary history and classification of eukaryotes. As Roger & Simpson said in 2009 “with the current pace of change in our understanding of the eukaryote tree of life, we should proceed with caution.”