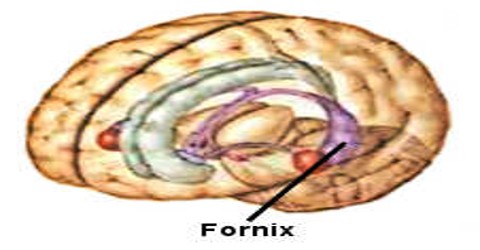 Fornix is the compact bundle of white fiber by which the hippocampus of each cerebral hemisphere projects to the opposite hippocampus and to the septum, the anterior nucleus of the thalamus, and the mamillary body. The anterior (front) and posterior (back) recesses into which the upper vagina is divided. These vaultlike recesses are formed by protrusion of the cervix into the vagina. The fornix uteri are also known as the fornix vaginae and the uterine fornices. It is part of the limbic system. While its exact function and importance in the physiology of the brain is still not entirely clear, it has been demonstrated in humans that surgical transection the cutting of the fornix along its body can cause memory loss. In anatomy, a fornix is a vaultlike or arched structure. Fornix is the Latin word for vault or arch.

Structure and Functions of Fornix

The body of the fornix travels anteriorly and divides again near the anterior commissure. The left and right parts separate, but there is also an anterior/posterior divergence.

The posterior fibers of each side continue through the hypothalamus to the mammillary bodies; then to the anterior nuclei of thalamus, which project to the cingulate cortex. The anterior fibers end at the septal nuclei and nucleus accumbens of each half of the brain. The body of fornix is just one segment of four components that comprise the fornix of the brain. The other elements are the fimbria, crus, and column. The fornix is C-shaped and is the main structure of the hippocampal formation. It is a bunch of nerve cell fibers protruding from the under surface of the corpus callosum, the nerve fibers that join the two halves of the brain. The fornix primarily function to connect the:

All of these brain structures – hippocampus, hypothalamus, thalamus, septal nuclei, as well as the amygdala, cingulate cortex, entorhinal cortex, perirhinal cortex, parahippocampal cortex, reticular formation of the midbrain, and the olfactory areas constitutes a system known as the Limbic System. The limbic system is involved in motivation, emotion, learning, memory, as well as other cognitive functions, and the system forms the area of the brain where the subcortical structures meet the cerebral cortex.

Here, it lies along the concavity of the hippocampus, on the surface of which some of its fibers are spread out to form the alveus, while the remainder are continued as a narrow white band, the fimbria of hippocampus, which is prolonged into the uncus of the parahippocampal gyrus.