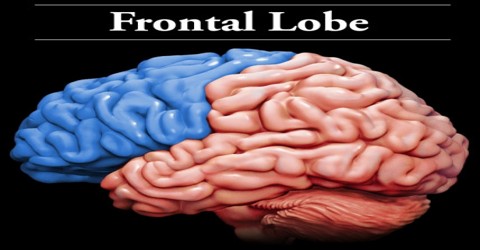 Frontal lobe is the largest and forwardmost lobe of each cerebral hemisphere, responsible for the control of skilled motor activity, including speech. Mood and the ability to think are also controlled by the frontal lobe. It is located at the front of each cerebral hemisphere and positioned in front of the parietal lobe and above and in front of the temporal lobe. It is separated from the parietal lobe by a space between tissues called the central sulcus, and from the temporal lobe by a deep fold called the lateral sulcus also called the Sylvian fissure. The frontal lobes are important for controlling thoughts, reasoning, and behaviors. It contains most of the dopamine-sensitive neurons in the cerebral cortex. The dopamine system is associated with reward, attention, short-term memory tasks, planning, and motivation. Dopamine tends to limit and select sensory information arriving from the thalamus to the forebrain. Structure and Functions of Frontal Lobe

Most neuroscientists divide the frontal lobe into four distinct regions, each containing a number of vital structures. Those include:

The function of the frontal lobe involves the ability to project future consequences resulting from current actions, the choice between good and bad actions, the override and suppression of socially unacceptable responses, and the determination of similarities and differences between things or events. It also plays an important part in integrating longer non-task based memories stored across the brain. These are often memories associated with emotions derived from input from the brain’s limbic system. The frontal lobe modifies those emotions to generally fit socially acceptable norms.