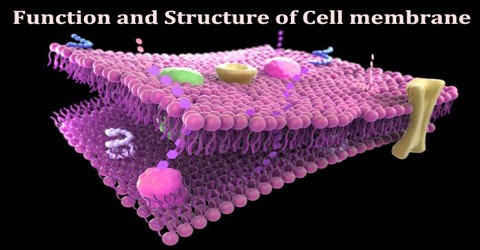 Function and Structure of Cell membrane

Function and Structure of Cell membrane The Cell membrane is primarily composed of a mix of proteins and lipids. While lipids help to give membranes their flexibility, proteins monitor and maintain the cell’s chemical climate and assist in the transfer of molecules across the membrane.

The Cell membranes are involved in a variety of cellular processes such as cell adhesion, ion conductivity and cell signalling and serve as the attachment surface for several extracellular structures, including the cell wall, glycocalyx, and intracellular cytoskeleton. Cell membranes can be artificially reassembled. Some functions of the cell membrane are: The cell membrane is primarily composed of a mix of proteins and lipids. Depending on the membrane’s location and role in the body, lipids can make up anywhere from 20 to 80 percent of the membrane, with the remainder being proteins. While lipids help to give membranes their flexibility, proteins monitor and maintain the cell`s chemical climate and assist in the transfer of molecules across the membrane. The Cell Membrane is a Fluid Mosaic: A cell is the basic unit of life, and all organisms are made up of one or many cells. One of the things that all cells have in common is a cell membrane. It is a barrier that separates a cell from its surrounding environment. It is composed of four different types of molecules:

The fluid mosaic model describes the structure of a cell membrane. It indicates that the cell membrane is not solid. It is flexible and has a similar consistency to vegetable oil, so all the individual molecules are just floating in a fluid medium, and they are all capable of moving sideways within the cell membrane. Phospholipids: Phospholipids are a major component of cell membranes. Phospholipids form a lipid bilayer in which their hydrophillic (attracted to water) head areas spontaneously arrange to face the aqueous cytosol and the extracellular fluid, while their hydrophobic (repelled by water) tail areas face away from the cytosol and extracellular fluid. The lipid bilayer is semi-permeable, allowing only certain molecules to diffuse across the membrane.

Glycolipids: Glycolipids are located on cell membrane surfaces and have a carbohydrate sugar chain attached to them. They help the cell to recognize other cells of the body.