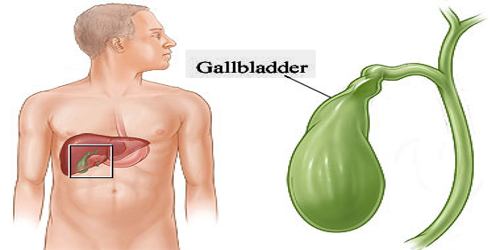 Gallbladder is a small, pear-shaped muscular sac in most vertebrates in which bile is stored. The gallbladder is located beneath the liver and secretes bile into the duodenum of the small intestine. In humans, it lies beneath the liver, although the structure and position of the gallbladder can vary significantly among animal species. It receives and stores bile produced by the liver, via the common hepatic duct, and releases it via the common bile duct into the duodenum, where the bile helps in the digestion of fats. Structure and Functions of Gallbladder

Gallbladder is a pear-shaped, hollow structure located under the liver and on the right side of the abdomen. Its primary function is to store and concentrate bile, a yellow-brown digestive enzyme produced by the liver. The angle of the gallbladder is located between the costal margin and the lateral margin of the rectus abdominis muscle. The fundus is at the same level as the transpyloric plane. The gallbladder is part of the biliary tract. The gallbladder is composed of three parts. The fondus, the base, sit right on the liver. The neck is the narrow place where the contents of the gallbladder drain into the cystic duct, on the way to the intestine. The main part of the gallbladder, the body, is essentially a muscular sack that holds 20 to 50 milliliters of bile. Bile is a bitter yellow-green liquid composed of cholesterol, bile salts, and bile pigment. The bile helps the digestive process by breaking up fats. It also drains waste products from the liver into the duodenum, a part of the small intestine.

The inner surface of the gallbladder wall is lined with mucous-membrane tissue similar to that of the small intestine. Cells of the mucous membrane have hundreds of microscopic projections called microvilli, which increase the area of fluid absorption. The absorption of water and inorganic salts from the bile by the cells of the mucous membrane causes the stored bile to be about 5 times—but sometimes as much as 18 times—more concentrated than when it was produced in the liver. The function of the gallbladder is to make the process of digestion run more smoothly in the presence of fat. When someone eats a large amount of it, the intestines signal the gallbladder to secrete extra bile to help with digestion. The hormone that does the signaling is called cholecystokinin, from the Greek words for “move,” “sac,” and “bile”. If the gallbladder has been removed, the body does not have an extra store of concentrated bile to inject all at once to digest a large quantity of fat. But fat in reasonable amounts is perfectly digestible for many people who have had the surgery, especially if it is eaten in combination with other foods.

The gallbladder is commonly subject to many disorders, particularly the formation of solid deposits called gallstones. Despite its activity, it can be surgically removed without serious effect.