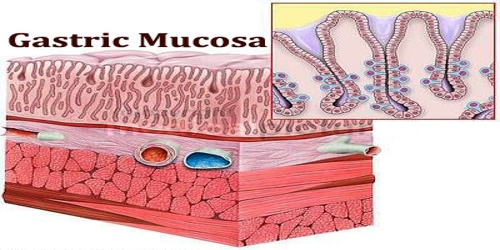 Gastric mucosa is the mucous membrane layer of the stomach which contains the glands and the gastric pits. It consists of epithelium, lamina propria, and the muscularis mucosae. In its fresh state, it is of a pinkish tinge at the pyloric end and of a red or reddish-brown color over the rest of its surface. In humans it is about 1 mm thick and its surface is smooth, soft, and velvety. It consists of simple columnar epithelium, lamina propria, and the muscularis mucosae. The gastric mucosa is normally covered by a thick layer of mucous. Once this layer is removed, one can make out a number of pores known as gastric pits. Each pit is the out let for 3-7 gastric glands.

The gastric glands are tubular glands which extend from the pit up to the muscularis mucosa. Each gland has got isthmus, neck, body and base. The characters of the gastric glands vary from the cardiac to the body and fundus and in the pyloric regions. They have five different types of cells.

Structure and Functions of Gastric Mucosa The surface of the mucous membrane is covered by a single layer of columnar epithelium. This epithelium commences very abruptly at the cardiac orifice, where there is a sudden transition from the stratified epithelium of the esophagus. The epithelial lining of the gland ducts is of the same character and is continuous with the general epithelial lining of the stomach. An important iodine concentration by sodium-iodide symporter (NIS) is present in mucinous cells of surface epithelium and gastric pits of the fundus and pyloric part of the stomach.