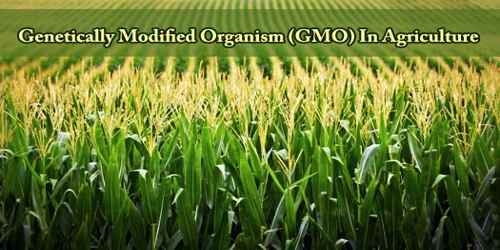 Genetically Modified (GM) foods were first approved for human consumption in the United States in 1994, and by 2014–15 about 90 percent of the corn, cotton, and soybeans planted in the United States were GM. By the end of 2014, GM crops covered nearly 1.8 million square kilometers (695,000 square miles) of land in more than two dozen countries worldwide. The majority of GM crops were grown in the Americas.

The exact definition of a genetically modified organism (GMO) and what constitutes genetic engineering varies, with the most common being an organism altered in a way that “does not occur naturally by mating and/or natural recombination”.

A narrower definition provided by the Food and Agriculture Organization (FAO), the World Health Organization (WHO) and the European Commission says that the organisms must be altered in a way that does “not occur naturally by mating and/or natural recombination”. There are examples of crops that fit this definition but are not normally considered GMOs. For example, the grain crop triticale was fully developed in a laboratory in 1930 using various techniques to alter its genome. The Cartagena Protocol on Biosafety in 2000 used the synonym living modified organism (LMO) and defined it as “any living organism that possesses a novel combination of genetic material obtained through the use of modern biotechnology.” Modern biotechnology is further defined as “In vitro nucleic acid techniques, including recombinant deoxyribonucleic acid (DNA) and direct injection of nucleic acid into cells or organelles, or fusion of cells beyond the taxonomic family.”

As the world’s demand for food continues to increase plant breeders work to breed better yielding crop varieties. They use a range of methods including conventional breeding, mutagenesis, genetic modification, gene editing, and marker aided selection to breed new improved crop varieties. Genetic modification allows plant breeders to produce a crop variety with specific characteristics that could not be bred using conventional breeding.

Engineered crops can dramatically increase per area crop yields and, in some cases, reduce the use of chemical insecticides. For example, the application of wide-spectrum insecticides declined in many areas growing plants, such as potatoes, cotton, and corn, that were endowed with a gene from the bacterium Bacillus thuringiensis, which produces a natural insecticide called Bt toxin. Field studies conducted in India in which Bt cotton was compared with non-Bt cotton demonstrated a 30–80 percent increase in yield from the GM crop. This increase was attributed to a marked improvement in the GM plants’ ability to overcome bollworm infestation, which was otherwise common. Studies of Bt cotton production in Arizona, U.S., demonstrated only small gains in yield about 5 percent with an estimated cost reduction of $25–$65 (USD) per acre owing to decreased pesticide applications.

In China, where farmers first gained access to Bt cotton in 1997, the GM crop was initially successful. Farmers who had planted Bt cotton reduced their pesticide use by 50–80 percent and increased their earnings by as much as 36 percent. By 2004, however, farmers who had been growing Bt cotton for several years found that the benefits of the crop eroded as populations of secondary insect pests, such as mirids, increased. Farmers once again were forced to spray broad-spectrum pesticides throughout the growing season, such that the average revenue for Bt growers was 8 percent lower than that of farmers who grew conventional cotton. Meanwhile, Bt resistance had also evolved in field populations of major cotton pests, including both the cotton bollworm (Helicoverpa armigera) and the pink bollworm (Pectinophora gossypiella).

According to the National Library of Medicine (part of the National Center for Biotechnology Information, or NCBI), genetically engineered, or GM, foods are those that have had foreign genes from other plants or animals inserted into their genetic codes. This has resulted in foods that are consistently flavored, as well as resistant to disease and drought.

Other GM plants were engineered for resistance to a specific chemical herbicide, rather than resistance to a natural predator or pest. Herbicide-resistant crops (HRC) have been available since the mid-1980s; these crops enable effective chemical control of weeds since only the HRC plants can survive in fields treated with the corresponding herbicide. Many HRCs are resistant to glyphosate (Roundup), enabling the liberal application of the chemical, which is highly effective against weeds. Such crops have been especially valuable for no-till farming, which helps prevent soil erosion.

However, because HRCs encourage the increased application of chemicals to the soil, rather than decreased application, they remain controversial with regard to their environmental impact. In addition, in order to reduce the risk of selecting for herbicide-resistant weeds, farmers must use multiple diverse weed-management strategies.

The first crops developed were used for animal or human food and provide resistance to certain pests, diseases, environmental conditions, spoilage or chemical treatments (e.g. resistance to a herbicide). The second generation of crops aimed to improve the quality, often by altering the nutrient profile. Third generation genetically modified crops could be used for non-food purposes, including the production of pharmaceutical agents, biofuels, and other industrially useful goods, as well as for bioremediation.

Another example of a GM crop is “golden” rice, which originally was intended for Asia and was genetically modified to produce almost 20 times the beta-carotene of previous varieties. Golden rice was created by modifying the rice genome to include a gene from the daffodil Narcissus pseudonarcissus that produces an enzyme known as phyotene synthase and a gene from the bacterium Erwinia uredovora that produces an enzyme called phyotene desaturase. The introduction of these genes enabled beta-carotene, which is converted to vitamin A in the human liver, to accumulate in the rice endosperm the edible part of the rice plant thereby increasing the amount of beta-carotene available for vitamin A synthesis in the body. In 2004 the same researchers who developed the original golden rice plant improved upon the model, generating golden rice 2, which showed a 23-fold increase in carotenoid production.

There are three main aims to agricultural advancement; increased production improved conditions for agricultural workers and sustainability. GM crops contribute by improving harvests through reducing insect pressure, increasing nutrient value, and tolerating different abiotic stresses. Despite this potential, as of 2018, the commercialized crops are limited mostly to cash crops like cotton, soybean, maize, and canola and the vast majority of the introduced traits provide either herbicide tolerance or insect resistance. Soybeans accounted for half of all genetically modified crops planted in 2014. Adoption by farmers has been rapid, between 1996 and 2013, the total surface area of land cultivated with GM crops increased by a factor of 100. Geographically though the spread has been uneven, with strong growth in the Americas and parts of Asia and little in Europe and Africa. Its socio-economic spread has been more even, with approximately 54% of worldwide GM crops grown in developing countries in 2013. Although doubts have been raised, most studies have found growing GM crops to be beneficial to farmers through decreased pesticide use as well as increased crop yield and farm profit.

However, the NCBI also maintains a list of potential risks associated with GM foods, including genetic alterations that can cause environmental harm. Specifically, it’s possible that modified organisms could be inbred with natural organisms, leading to the possible extinction of the original organism. For instance, the banana tree is propagated entirely through cloning methods. The bananas themselves are sterile.

By far, the biggest use of GMO technology is in large-scale agricultural crops. At least 90% of the soy, cotton, canola, corn and sugar beets sold in the United States have been genetically engineered. The adoption of herbicide-resistant corn, which had been slower in previous years, has accelerated, reaching 89% of U.S. corn acreage in 2014 and 2015, according to the U.S. Department of Agriculture.

Biopharmaceuticals produced include cytokines, hormones, antibodies, enzymes, and vaccines, most of which are accumulated in the plant seeds. Many drugs also contain natural plant ingredients and the pathways that lead to their production have been genetically altered or transferred to other plant species to produce greater volume. Other options for bioreactors are biopolymers and biofuels. Unlike bacteria, plants can modify the proteins post-translationally, allowing them to make more complex molecules. They also pose less risk of being contaminated. Therapeutics have been cultured in transgenic carrot and tobacco cells, including drug treatment for Gaucher’s disease.

One of the biggest draws for widespread adoption of GMO crops is pest resistance. According to the World Health Organization (WHO), one of the most widely used methods for incorporating pest resistance into plants is through Bacillus thuringiensis (Bt) genetics, a bacterium that produces proteins that repel insects. GMO crops that are modified with the Bt gene have proven resistance to insect pests, thus reducing the need for wide-scale spraying of synthetic pesticides. A variety of other crops modified to endure the weather extremes common in other parts of the globe are also in production.