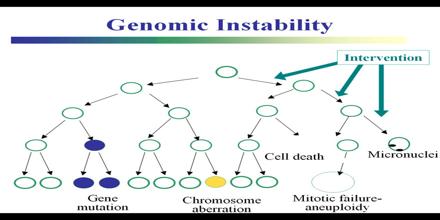 Genome Instability is a major driving force for tumorigenesis. It also refers to an increased tendency of alterations in the genome during the life cycle of cells. In multicellular organisms genome instability is central to carcinogenesis. In humans it is also a factor in some neurodegenerative diseases such as amyotrophic lateral sclerosis or the neuromuscular disease myotonic dystrophy. Genomic Instability is minimized by four major mechanisms: high-fidelity DNA replication in S-phase, precise chromosome segregation in mitosis, error free repair of sporadic DNA damage, and a coordinated cell cycle progression.