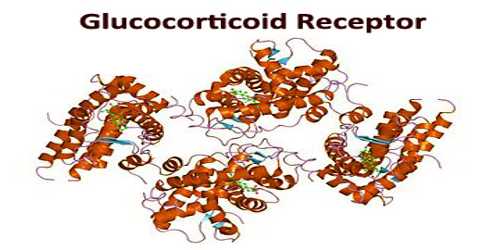 Glucocorticoid Receptor (GR) also known as NR3C1 (nuclear receptor subfamily 3, group C, member 1), which is mediates actions of glucocorticoids (GCs) on gene transcriptional regulation. GCs are widely used in treating diseases such as autoimmune disorders. The GR is expressed in almost every cell in the body and regulates genes controlling the development, metabolism, and immune response. Because the receptor gene is expressed in several forms, it has many different (pleiotropic) effects in different parts of the body. Glucocorticopid Receptor (GR) is the first member of this subfamily, is a ubiquitously expressed intracellular protein, which functions as a ligand-dependent transcription factor that regulates the expression of glucocorticoid-responsive genes. The effector domains of the GR mediate transcriptional activation by recruiting coregulatory multi-subunit complexes that remodel chromatin, target initiation sites, and stabilize the RNA polymerase II machinery for repeated rounds of transcription of target genes. This review summarizes the basic aspects of the structure and of the human (h) GR, and the molecular basis of its biologic function.

In humans, the GR protein is encoded by NR3C1 gene which is located on chromosome 5 (5q31). Glucocorticoid receptors were first identified in the 1960s in thymus cells. They have since been found in almost all cells, supporting the conclusion that almost all cells are targets for glucocorticoids. Like other members of the steroid and thyroid hormone receptor family, the type I (mineralocorticoid) and type II (glucocorticoid) adrenal steroid receptors are ligand-dependent transcription factors which act in the nucleus.

Structure and Functions of Glucocorticopid Receptor In humans, glucocorticoids regulate a broad spectrum of physiologic functions essential for life and play an important role in the maintenance of basal and stress-related homeostasis. Approximately 20% of the genes expressed in human leukocytes are regulated positively or negatively by glucocorticoids.

Like the other steroid receptors, the glucocorticoid receptor is modular in structure and contains the following domains (labeled A – F):

Glucocorticoids are involved in almost every cellular, molecular and physiologic network of the organism and play a pivotal role in critical biologic processes, such as growth, reproduction, intermediary metabolism, immune and inflammatory reactions, as well as central nervous system and cardiovascular functions. In central nervous system structures, the glucocorticoid receptor is gaining interest as a novel representative of neuroendocrine integration, functioning as a major component of endocrine influence – specifically the stress response – upon the brain. Physiologic amounts of glucocorticoids are also essential for normal renal tubular function and thus for water and electrolyte homeostasis. Furthermore, glucocorticoids represent one of the most widely used therapeutic compounds often employed in the treatment of inflammatory, autoimmune and lymphoproliferative disorders