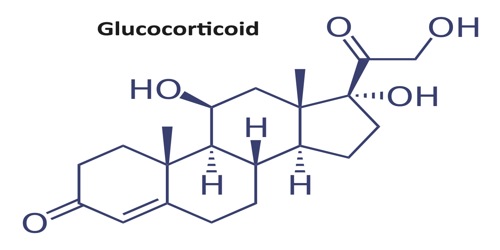 Glucocorticoid is any of a group of anti-inflammatory steroidlike compounds, such as hydrocortisone, that are produced by the adrenal cortex, are involved in carbohydrate, protein, and fat metabolism, and are used as anti-inflammatory agents. Glucocorticoids (GCs) are steroidal hormones or corticosteroids. Cortisone and cortisol are produced naturally by the body, but in small quantities; the hormones are thus secreted to compensate for adrenal deficiencies. Synthesized glucocorticoids reinforce this action. The adrenal gland is an organ situated on top of the kidney. It consists of an outer cortex (adrenal cortex) and an inner medulla (adrenal medulla). The hormones secreted from the cortex are steroids, generally classified as glucocorticoids (e.g., cortisol) and mineralocorticoids (e.g., aldosterone, which causes sodium retention and potassium excretion by the kidney). Those substances emanating from the medulla are amines, such as epinephrine and norepinephrine.

Effects and Uses of Glucocorticod Long-term use of glucocorticoids can cause a loss of muscle tissue. It can also result in Cushing’s syndrome, which can lead to:

Glucocorticoids could be used in the treatment of decompensated heart failure to potentiate renal responsiveness to diuretics, especially in heart failure patients with refractory diuretic resistance with large doses of loop diuretics.