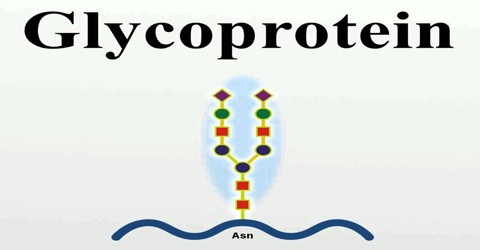 Glycoproteins are a class of proteins, which have a glycosyl group or glycans-carbohydrates attacthed to their protein chain. This process is known as glycosylation. Secreted extracellular proteins are often glycosylated. Glycoproteins are frequently present at the surface of cells where they function as membrane proteins or as part of the extracellular matrix. These cell surface glycoproteins play a critical role in cell–cell interactions and the mechanisms of infection by bacteria and viruses. Different types of glycoproteins are based on the different processes of glycosyaltion which give glycoproteins that differ in the placement of glycan part as their substitution groups.

The sugar part’s substitution and position solely determine the protein’s folding mechanism, which means that it is different for each glycoprotein- based purely on the sugar residue and not on the protein residue. Hormones that are glycoproteins include:

Glycoproteins are involved in nearly every process in cells! They have diverse functions such as in our immune system, protection of our body, communication between cells, and our reproductive systems. It also provides many functions: they give structural support to cells, help to form connective tissues and facilitate digestion by producing secretions and mucous in the gastrointestinal tract. Glycoproteins are handy cell components and are found in many places within cells. Glycoproteins are located in cell walls, blood plasma and connective tissues, and they have fine structural differences depending on their location. They also play key roles in reproduction and occur on the surface of spermatozoa, increasing the likelihood of a sperm cell’s attraction to eggs by altering the permeability of plasma membranes. These proteins may also adhere to cells and enable development of functional tissues in the body. Proteins are composed of amino acids. Besides amino acids, conjugated proteins contain a non-protein part known as prosthetic group or conjugating group. Glycoprotein is an example of conjugated protein where prosthetic group (simply non-protein part) attached to the protein chain is carbohydrate.

Glycoproetins are a part of integral membrane proteins.b. They play a vital role in cell-cell interactions and pathogenic response by the hosts. Regulatory mechanisms in phosphorylation based cell signalling. Found in platelets; provide functional stability to them.