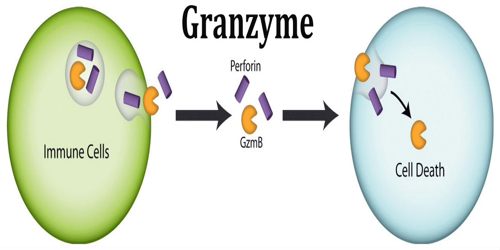 Granzyme is a group of serine proteases that are released by the body’s natural killer cells and cytotoxic T-cells. When cells become infected by viruses, the immune system is triggered. Cytotoxic T cells and natural killer cells release a protein called perforin, which attacks the target cells. Researchers used to think that perforin creates pores within the cell membranes, through which the granzymes can enter, inducing apoptosis. Granzymes are identified as being part of the serine esterase family. They are closely related to other immune serine proteases expressed by innate immune cells, such as neutrophil elastase and cathepsin G. However, new evidence indicates that a multimeric complex can enter a cell through the mannose 6-phosphate receptor and is enclosed in a vesicle. Not mentioned in reference Perforin then allows GrB to pass through the vesicle surface and into the cell, causing apoptosis by various pathways.

Perforin, which is also called perforin-1, is a type of cytolytic protein that is found in natural killer cells and T-cells. With infected cells, perforin and granulysin work to penetrate the membrane of the infected cells, which creates a pore-like opening. It is this opening that allows the granzyme to enter and destroy the cell from the inside.

Granzymes have also been found to help initiate the inflammatory response. Granzyme B, one of the many types of granzymes produced, is believed by many researchers to play an important role in the apoptosis process. Previously, research showed that perforin was the only induction agent that created access holes in infected cells. Newer research suggests that granzyme B works in conjunction with perforin and granulysin to accomplish this goal as part of a protein triple combination. The interaction between the granzymes and somatic cells are still unexplainable but advances in understanding the process are being made constantly. Other granzymes like granzyme K have been found in high levels of patients who have gone septic. Granzyme H has been found to have a direct correlation with patients who have a viral infection. Scientists are able to conclude that granzyme H specializes in detecting ‘proteolytic degradation’ which is found in viral proteins.

Granzymes also have other functions besides contributing to the triggering of apoptosis. They are also involved in activating cytokines and inducing their secretions. Additionally, granzymes aid in regulating the growth of many types of white blood cells, including T-lymphocytes and B-cells. Measuring the granzyme secretion levels is accomplished in one of two ways. The Western blot technique measures the proteins on a strip with a serum that shows the reaction that will occur.