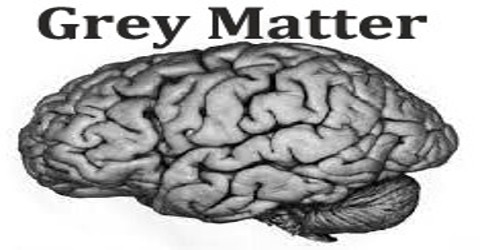 Axons are the processes that extend from neuronal cell bodies, carrying signals between those bodies. In the grey matter, these axons are mainly unmyelinated, meaning they are not covered by a whitish-colored, fatty protein called myelin. The grey matter serves to process information in the brain. Structures within the grey matter process signals generated in the sensory organs or other areas of the grey matter. This tissue directs sensory (motor) stimuli to nerve cells in the central nervous system where synapses induce a response to the stimuli. These signals reach the grey matter through myelinated axons that make up the bulk of the white matter in the cerebrum, cerebellum and spine.

The colour difference arises mainly from the whiteness of myelin. In living tissue, grey matter actually has a very light grey colour with yellowish or pinkish hues, which come from capillary blood vessels and neuronal cell bodies.

Structure and Functions of Grey Matter

Axons in the grey matter are mainly unmyelinated, the greyish hue of the neurons and glial cells combine with the red of the capillaries to give this tissue its greyish-pink color. It refers to unmyelinated neurons and other cells of the central nervous system. It is present in the brain, brainstem and cerebellum, and present throughout the spinal cord. The primary function of gray matter is to carry sensory information that comes from grey matter cells and sensory organs. This information is then passed to the areas of the brain that process sensory information. Intelligence and skill are often attributed to this brain matter, largely because it covers so much of the brain. Additionally, studies have shown that each person has different amounts and density of this brain matter, often showing higher concentrations in areas related to specific intellectual aspects or skill mastery.