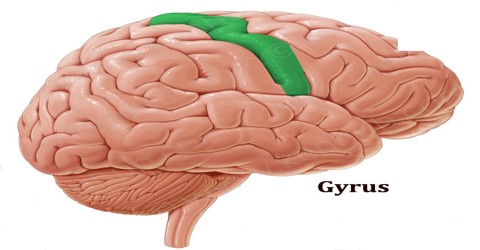 The cerebral cortex, both gyri and sulci, is made up of neurons. There are two major types of neurons in this region, projection neurons and interneurons. These neurons are distributed in columns throughout the neocortex, which is about 2 to 4 millimeters thick. The thickness of this area stays constant throughout many species, but the numbers of columns is much larger in more intelligent species. The wrinkled surface of the cerebral cortex drastically increases the brain’s surface area, making room for more columns of neurons.

Many gyri are constant enough in their occurrence as anatomic features that they have been given names as, for example, the cingulate gyrus, the dentate gyrus, and so on.

Structure and Functions of Gyrus

A gyrus is a ridge on the cerebral cortex. It is generally surrounded by one or more sulci. The gyri are part of a system of folds and ridges that create a larger surface area for the human brain and other mammalian brains. Because the brain is confined to the skull, brain size is limited. Ridges and depressions create folds allowing a larger cortical surface area, and greater cognitive function, to exist in the confines of a smaller cranium. The wrinkled gray matter of the brain is divided into six layers based on the different types of cells found at different depths. Beneath the gray matter, there is another region made up of white matter. White matter contains the myelinated axons that communicate with other cells.

Moving from the midline of the brain laterally, there are three major gyri on the front part of the cerebral cortex. Most medially located is the superior frontal gyrus. Next to this there is the middle frontal, and then the inferior frontal gyri. These cover a large portion of the surface of the brain’s frontal lobe. The human brain undergoes gyrification during fetal and neonatal development. In embryonic development, all mammalian brains begin as smooth structures derived from the neural tube.