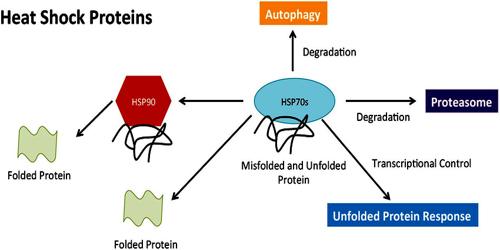 Heat shock protein (HSP) is an intracellular protein that increases in concentration during metabolic stress, such as exposure to heat. HsPs affect protein assembly, folding, sorting, and uptake into organelles. There are various kinds of HsPs, each performing different functions. The dramatic upregulation of the heat shock proteins is a key part of the heat shock response and is induced primarily by heat shock factor (HSF). HSPs are found in virtually all living organisms, from bacteria to humans. In 1962, Italian geneticist Ferruccio Ritossa reported that heat and the metabolic uncoupler 2,4-dinitrophenol induced a characteristic pattern of puffing in the chromosomes of Drosophila. This discovery eventually led to the identification of the heat-shock proteins (HSP) or stress proteins whose expression these puffs represented. Increased synthesis of selected proteins in Drosophila cells following stresses such as heat shock was first reported in 1974.

HSPs, also known as chaperones, play crucial roles in folding/unfolding of proteins, assembly of multiprotein complexes, transport/sorting of proteins into correct subcellular compartments, cell-cycle control and signaling, and protection of cells against stress/apoptosis. More recently, HSPs have been implicated in antigen presentation with the role of chaperoning and transferring antigenic peptides to the class I and class II molecules of the major histocompatibility complexes.

Heat shock proteins constitute a large family of proteins that are often classified based on their molecular weight: hsp10, hsp40, hsp60, hsp70, hsp90, etc. HSPs have a dual function depending on their intracellular or extracellular location. Intracellular HSPs have a protective function. Production of high levels of heat shock proteins can also be triggered by exposure to different kinds of environmental stress conditions, such as infection, inflammation, exercise, exposure of the cell to toxins (ethanol, arsenic, trace metals, and ultraviolet light, among many others), starvation, hypoxia (oxygen deprivation), nitrogen deficiency (in plants), or water deprivation. As a consequence, the heat shock proteins are also referred to as stress proteins and their upregulation is sometimes described more generally as part of the stress response. Several heat shock proteins function as intra-cellular chaperones for other proteins. They play an important role in protein–protein interactions such as folding and assisting in the establishment of proper protein conformation (shape) and prevention of unwanted protein aggregation. It also occurs under non-stressful conditions, simply “monitoring” the cell’s proteins. Some examples of their role as “monitors” are that they carry old proteins to the cell’s “recycling bin” (proteasome) and they help newly synthesised proteins fold properly.

Several HSPs have also been demonstrated to directly interact with various components of the tightly regulated programmed cell death machinery, upstream and downstream of the mitochondrial events. On the other hand, extracellular located or membrane-bound HSPs mediate immunological functions. They can elicit an immune response modulated either by the adaptive or innate immune system. Heat shock proteins are useful as immunologic adjuvants in boosting the response to a vaccine. Furthermore, some researchers speculate that HSPs may be involved in binding protein fragments from dead malignant cells and presenting them to the immune system. Therefore, HSPs may be useful for increasing the effectiveness of cancer vaccines.

Intracellular heat shock proteins are highly expressed in cancerous cells and are essential to the survival of these cell types. Various HSPs were shown to be differentially expressed in the leaf and root of drought tolerant and sensitive sorghum plants in response to drought.