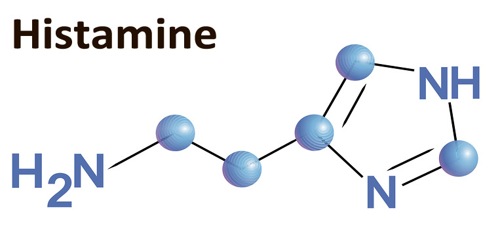 Histamine is an organic compound found widely in animals and plants that in humans and other mammals is released as part of the body’s immune response, causing physiological changes including dilation of the blood vessels, contraction of smooth muscle as in the airways, and increased gastric acid secretion. As part of an immune response to foreign pathogens, histamine is produced by basophils and by mast cells found in nearby connective tissues. Histamine increases the permeability of the capillaries to white blood cells and some proteins, to allow them to engage pathogens in the infected tissues. The itching and sneezing typical of respiratory allergies are caused by the release of histamine. Its chemical formula: C5H9N3. Histamine is chemically classified as an amine, an organic molecule based on the structure of ammonia (NH3). It is formed by the decarboxylation (the removal of a carboxyl group) of the amino acid histidine.

Histamine serves as an important part of our body’s immune response. When we come into contact with an allergen, such as pollen or animal dander, histamine is released by the body to the site of contact. The intention of this response is to help the body deal with the irritation caused by the allergen. Strangely enough, the histamine released actually causes allergic symptoms. In addition, in cases of severe allergy, the release of histamine can be deadly.

Histamine was first synthesized in 1907 and its pharmacological properties were demonstrated in 1911. Because the substance was extracted from tissue, the word “histo” was used to describe this “amine”. Receptor subtypes for histamine were characterized in 1966 and the first antihistamine drugs were developed between 1943 and 1944. It gives a colorless hygroscopic crystal that melts at 84°C and is easily dissolved in water or ethanol. It is insoluble in ether. In a solution of water, histamine exists in two tautomeric forms, ”Nπ-H”-histamine and ”Nτ-H”-histamine. Its chemical structure includes two basic centres – one of them is an aliphatic amino group and the other is whichever nitrogen in the imidazole does not have a proton. In the body, the aliphatic amino group (having a pKa around 9.4) is protonated and the nitrogen a (pKa ≈ 5.8) is not protonated.

In humans histamine is found in nearly all tissues of the body, where it is stored primarily in the granules of tissue mast cells. The blood cells called basophils also harbour histamine-containing granules. Once released from its granules, histamine produces many varied effects within the body, including the contraction of smooth muscle tissues of the lungs, uterus, and stomach; the dilation of blood vessels, which increases permeability and lowers blood pressure; the stimulation of gastric acid secretion in the stomach; and the acceleration of heart rate. Histamine also serves as a neurotransmitter, carrying chemical messages between nerve cells. There are four types of receptor sites within the body. One of the most important is known as H1. This receptor is involved in allergic reactions. But this is not the only role of histamine in the body. Histamine also binds to H1 receptors in order to help regulate our internal clock. The binding of histamine to H1 receptors makes you feel more alert. In addition, the binding of histamine to other types of receptors affect gastric acid secretion as well as some neurological effects. Histamine is a hydrophilic vasoactive amine and once formed, it is either quickly inactivated or stored. When released at synapses, it is broken down by acetaldehyde dehydrogenase. When this enzyme is deficient, there is an increased risk of allergic reactions, as histamine accumulates in the synapses. Histamine is broken down by the enzymes diamine oxidase and histamine-N-methyltransferase.

The effect histamine has on blood vessels is crucial to its role in the immune response, which is most clearly observed in inflammation—i.e., the local reaction of bodily tissues to injury caused by physical damage, infection, or allergic reaction.