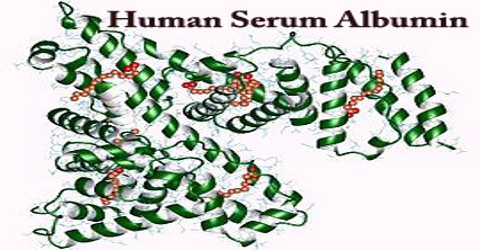 Human Serum Albumin (or HSA) is the most abundant protein in plasma, which is a monomeric multi-domain macromolecule, representing the main determinant of plasma oncotic pressure and the main modulator of fluid distribution between body compartments. It is the most abundant protein in human plasma with a molecular weight of 66,437 Da, based on amino acid composition. Commercial preparations contain varying degrees of post-translational modifications and genetic variants with molecular weight components mainly in the range of 66,437 to 66,600 Da. Albumin transports hormones, fatty acids, and other compounds, buffers pH, and maintains oncotic pressure, among other functions. It is synthesized in the liver as preproalbumin, which has an N-terminal peptide that is removed before the nascent protein is released from the rough endoplasmic reticulum. The product, proalbumin, is in turn cleaved in the Golgi vesicles to produce the secreted albumin.

Human Serum Albumin (HSA) is a globular protein of 585 amino acids, which accounts for about 60% of the total protein in blood serum. In the serum of human adults, the concentration of albumin is ∼40 mg/ml. It has an exceptional binding capacity for a wide range of endogenous and exogenous ligands, and its abundance makes it an important determinant of the pharmacokinetic behavior of many drugs. HSA is composed of three structurally similar globular domains, each of which contains two subdomains, denominated subdomain IA, IB, IIA, IIB, IIIA, and IIIB. It is generally accepted today that albumin evolved from an ancestral protein of about 190 amino acids by triplication of this primordial domain. This view is most impressively documented by the striking internal homology of the atomic structure of the protein, by the unique arrangement of disulfide loops that repeat as a series of triplets, and by the symmetrical location of the introns and exons of the albumin gene on chromosome.