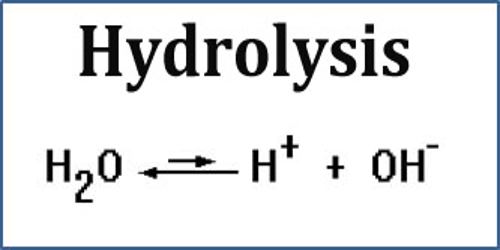 Hydrolysis is the breaking down of a chemical compound into two or more simpler compounds by reacting with water. The proteins, fats, and complex carbohydrates in food are broken down in the body by hydrolysis that is catalyzed by enzymes in the digestive tract. The term comes from the Greek prefix hydro- (meaning water) with lysis (meaning to break apart). Hydrolysis may be considered the reverse of a condensation reaction, in which two molecules combine with each other, producing water as one of the products. Generally, hydrolysis or saccharification is a step in the degradation of a substance OR in the language of chemistry “The reaction of cation and anion or both with water molecule due to which pH is altered, cleavage of H-O bond in hydrolysis takes place.” The general formula of a hydrolysis reaction is: AB + H2O → AH + BOH

Hydrolysis is quite useful in both biology and chemistry. Biological applications range from breaking sugar molecules down in our body to participating in the release of stored energy from ATP.

In water, salts will dissociate to form ions (either completely or incompletely depending on the respective solubility constant, KspKsp. For example: A base hydrolysis reaction will resemble the reaction for base dissociation. A common weak base that dissociates in water is ammonia: NH3+H2O⇌NH+4+OH−

In the hydrolysis of ammonia, the ammonia molecule accepts a proton from the water (i.e., water acts as a Bronsted-Lowry acid), producing a hydroxide anion (OH–). Similar to a basic dissociation reaction, ammonia forms ammonium and a hydroxide from the addition a water molecule.

In biological systems, hydrolysis tends to be catalyzed by enzymes. A good example is the hydrolysis of the energy molecule ATP. Catalyzed hydrolysis is also used for digestion of proteins, carbohydrates, and lipids. The energy that is converted from food is stored into ATP molecules (Adenosine Triphosphate). Life requires many processes in order to sustain itself such as cellular respiration, respiration, muscle contraction, distribution of hormones, transmittance of neuro-transmitters in the brain, etc. All of these important processes require an input of energy. To distribute this energy, the energy from the ATP molecules must be released. To release the energy stored in the bonds of ATP molecules, hydrolysis must occur to break a phosphate group off of an ATP molecule, thus releasing energy from the bonds. ATP now becomes ADP (Adenosine Diphosphate) from losing a phosphate group through hydrolysis.