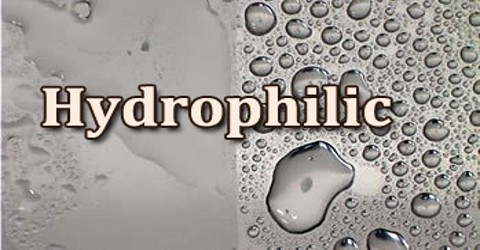 Hydrophilic is a molecule or other molecular entity that is attracted to water molecules and tends to be dissolved by water. It refers to having a strong affinity for water. Something that is hydrophilic is soluble in water and dissolves into water very easily. Hydrophilic is the opposite of hydrophobic. Hydrophilic and hydrophobic surfaces both have important applications in all types of engineering, including:

Hydrophilic substances can cause corrosion to metal surfaces and alloys.

Water is a polar molecule. Polar molecules are molecules that have partial charges due to uneven bonding. The oxygen atom in a water molecule is highly electronegative, which means that it will pull the electrons in a bond closer to it. This, in turn, makes oxygen partially negative and hydrogen partially positive.

Hydrophilic molecule or portion of a molecule is one whose interactions with water and other polar substances are more thermodynamically favorable than their interactions with oil or other hydrophobic solvents. They are typically charge-polarized and capable of hydrogen bonding. This makes these molecules soluble not only in water but also in other polar solvents. Since water has these partial charges, it can attract other chemicals that also have partial charges. Therefore, hydrophilic molecules must have a charged portion in order to dissolve in water. Hydrophilicity is an important quality of many essential materials in nature and in the human body. Hydrophilic membrane filtration is used in several industries to filter various liquids. These hydrophilic filters are used in the medical, industrial, and biochemical fields to filter such elements as bacteria, viruses, proteins, particulates, drugs, and other contaminates. Common hydrophilic molecules include colloids, cotton, and cellulose, which cotton consists of.

Hydrophilic substances are those that have a chemical attraction to water. Even though water is a somewhat covalent molecule, the two electrons from the hydrogen atoms spend more time with the oxygen atom, which is quite electronegative. So up close, molecules or ions that are negatively charged, or that have one part that is negative and another part that is positive, tend to be attracted to the hydrogens in water. And positive ions tend to be attracted to the oxygen atom in water. Most salts are this way.

In general, hydrophilic substances have lots of oxygen or nitrogen atoms in their structure.   For instance, Silica (quartz) is SiO2. Gypsum is CaSO4. Both of these compounds have lots of O atoms and asre strongly hydrophilic.  Diamond (Carbon) has no O atoms and is Oleophilic.