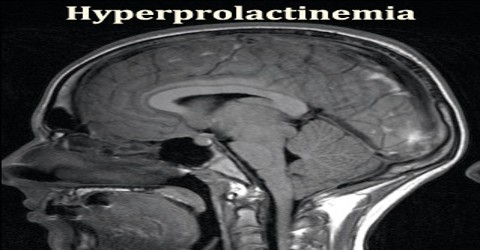 Hyperprolactinemia (or Hyperprolactinaemia) is elevated levels of prolactin in the blood; which is a normal physiologic reaction during lactation, but pathologic otherwise; often due to physical or emotional stress or rapid weight loss, sometimes to pituitary adenoma; amenorrhea is usually present. It is a disorder marked by the overproduction of prolactin (one of eight hormones produced by the pituitary gland) in both men and nonpregnant women. Hyperprolactinemia occurs when higher than normal levels is found in the blood. Typically, serum or blood levels are less than 20 ng/ml.

When hyperprolactinemia is caused by an impaired function that requires consultation with an endocrinologist, it is advised to investigate a pituitary adenoma that could be the cause of increased prolactin levels in cases that do not involve a pregnancy. This could also be responsible for amenorrhea and often bilateral galatorrhea (secretion of milk from both breasts). Addison’s disease, stress, myxoedema, and the abuse of narcotics, can all also be the cause of hyperprolactinemia. Causes, Signs and Symptoms of Hyperprolactinemia

Hyperprolactinaemia may be caused by either disinhibition; e.g., compression of the pituitary stalks or reduced dopamine levels or excess production from a prolactinoma, which is a type of pituitary adenoma.

A benign pituitary tumor (adenoma or prolactinoma) is the most common cause of abnormal prolactin overproduction.

Prolactin levels are typically kept in check by the neurotransmitter dopamine, a substance produced in the brain by the hypothalamus. Decreased dopamine levels, due to a disease of the hypothalamus or a dopamine-blocking drug, may lead to increased levels of prolactin. Many other drugs can raise prolactin levels. High-dose estrogen can raise blood prolactin levels. People with an underactive thyroid (Hypothyroidism) may have elevated levels of prolactin. Chronic kidney failure or cirrhosis (Cirrhosis) may be associated with hyperprolactinemia.

Moreover, increased levels of prolactin in the blood decrease the secretion of gonadotropins, hormones that stimulate the sex cells. This action explains the cycle disorders, or even an absence of menstruation in women and impotence in men. Symptoms of hyperprolactinemia may be nonexistent; men or women may notice the following:

Headaches and impaired vision may occur as tumor growth exerts pressure within the skull. Prolactin can be easily measured through a routine blood test. Because a number of factors can affect the blood values, one should avoid breast stimulation and intercourse the night before the test. If the blood test comes back elevated, the doctor may wish to repeat the test, this time after fasting for at least 8 hours. While a plain X-ray of the bones surrounding the pituitary may reveal the presence of a large macro-adenoma, the small micro-adenoma will not be apparent. Magnetic resonance imaging (MRI) is the most sensitive test for detecting pituitary tumours and determining their size. Computed Tomography (CT scan) also gives an image of the pituitary, but it is less sensitive than the MRI.

Treatment for hyperprolactinemia depends on the cause and the severity of the disorder. In some patients, prolactin levels spontaneously revert to normal. Some pituitary tumors may be small enough that treatment is not required, although regular follow-up evaluations are necessary.

When the disorder is caused by a tumor, the first line of treatment is medication, either bromocriptine or cabergoline. Pergolide may be used as a secondline agent. Therapy may even shrink the tumor. Levels of prolactin usually fall within days of beginning therapy. Surgery can sometimes be indicated if the medication is not working or tolerated, or if a pituitary tumor is too large and not responding to medical therapy. Treatment for causes other than tumors varies.  Doctor will determine the appropriate therapy.

A new drug in use is norprolac with the active ingredient quinagolide. Vitex agnus-castus extract can be tried in cases of mild hyperprolactinaemia. There is no way to prevent prolactin-producing pituitary tumors.

Hormones are substances that are transported by the bloodstream and affect various organs and testosterone produced by the testes acts on the bone, skin, and fat tissue. Many metabolic functions (blood sugar regulation, serum calcium …) are dependent on hormones.