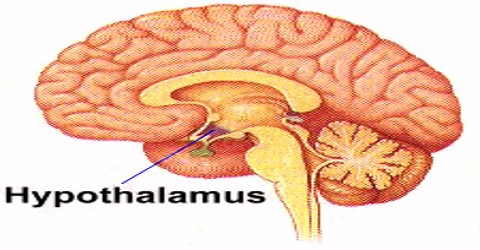 Hypothalamus is a small but important part of the brain and plays an important role in hormone production and helps to stimulate many important processes in the body. The word hypothalamus comes from two Greek words that translate to “under thalamus.” This is exactly where the hypothalamus is located in the brain, underneath the thalamus and above the pituitary gland. Hypothalamus is responsible for certain metabolic processes and other activities of the autonomic nervous system. It synthesizes and secretes certain neurohormones, called releasing hormones or hypothalamic hormones, and these in turn stimulate or inhibit the secretion of pituitary hormones. The hypothalamus controls body temperature, hunger, and important aspects of parenting and attachment behaviours, thirst, fatigue, sleep, and circadian rhythms.

Structure and Functions of Hypothalamus

Damage to the anterior hypothalamus blocks the production of ADH. This leads to a condition where the kidney fails to conserve water and the condition is called diabetes insipidus. CRH is released by the paraventricular nuclei and taken up by the portal system where it has action on the anterior lobe of the pituitary. There are connections with the eye and the brain. The connections between the retina to the suprachiasmatic nucleus deals with the synchronization of the daily rhythms also known as circadian rhythms. Any lesion or disease of the hypothalamus thus affects the sleep-waking cycle.

The body’s normal, balanced state of being is known as homeostasis. The main job of the hypothalamus to keep the body in this state as much as possible. It’s acts as the connector between the endocrine and nervous systems. It plays a part in many essential functions of the body such as: Causes and Risk Factors of Hypothalamus

Injuries or diseases affecting the hypothalamus may produce symptoms of pituitary dysfunction or diabetes insipidus; in the latter disorder, the absence of vasopressin, which promotes the reabsorption of water in the kidneys, induces the rapid loss of water from the body through frequent urination. Hypothalamic disease can also cause insomnia and fluctuations in body temperature. In addition, the optic chiasm is particularly susceptible to pressure from expanding tumours or inflammatory masses in the hypothalamus or the pituitary gland. Pressure on the optic chiasm can result in visual defects or even blindness.