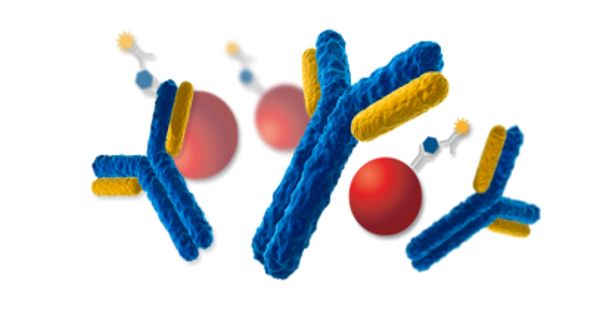 Immunoassays (IAs) play a critical role in various bioanalytical settings, such as clinical diagnostics, biopharmaceutical analysis, environmental monitoring, security, and food testing. An immunoassay is a biochemical test that measures the presence or concentration of a macromolecule or a small molecule in a solution through the use of an antibody (usually) or an antigen (sometimes). These are used in screening to quantify the production or inhibition of antigens/haptens related to a disease target.

An immunoassay is a test that relies on biochemistry to measure the presence and/or concentration of an analyte. The analyte can be large proteins, antibodies that a person has produced as a result of an infection, or small molecules.

Immunoassays are quick and accurate tests that can be used on-site and in the laboratory to detect specific molecules. The molecule detected by the immunoassay is often referred to as an “analyte” and is in many cases a protein, although it may be other kinds of molecules, of different sizes and types, as long as the proper antibodies that have the required properties for the assay are developed. It is a highly selective bioanalytical method that measures the presence or concentration of analytes ranging from small molecules to macromolecules in a solution through the use of an antibody or an antigen as a biorecognition agent.

Immunoassays are used to quantify molecules of biological interest based on the specificity and selectivity of antibody reagents generated. When immunoassays are used to test for the presence of an antibody in a blood or fluid sample, the test contains the specific antigen as part of the detection system. These are used when an unknown concentration of an analyte within a sample needs to be quantified. If the antibody being tested for is present in the sample, it will react with or bind to the antigen in the test system and will be detected as positive. If there is no significant reaction, the sample tests negative.

When immunoassays are used to test for the presence of antigens in a blood or fluid sample, the test contains antibodies to the antigen of interest. Immunoassays come in many different formats and variations. The reaction of the antigen that is present in the person’s sample to the specific antibody is compared with reactions of known concentrations and the amount of antigen is reported. Immunoassays may be run in multiple steps with reagents being added and washed away or separated at different points in the assay. Examples of immunoassay tests for antigens include drug levels (like digoxin, vancomycin), hormone levels (like insulin, TSH, estrogen), and cancer markers (like PSA, CA-125, and AFP). Multi-step assays are often called separation immunoassays or heterogeneous immunoassays.

The use of a calibrator is often employed in immunoassays. Calibrators are solutions that are known to contain the analyte in question, and the concentration of that analyte is generally known. To obtain the most accurate determination of the unknown concentration, an immunoassay must be developed based not only on the usual assay development criteria but also on how well the immunoassay can predict the value of an unknown sample.

Comparison of an assay’s response to a real sample against the assay’s response produced by the calibrators makes it possible to interpret the signal strength in terms of the presence or concentration of analyte in the sample. Immunoassays have been widely used in many important areas of pharmaceutical analysis such as diagnosis of diseases, therapeutic drug monitoring, clinical pharmacokinetics and bioequivalence studies in drug discovery and pharmaceutical industries.