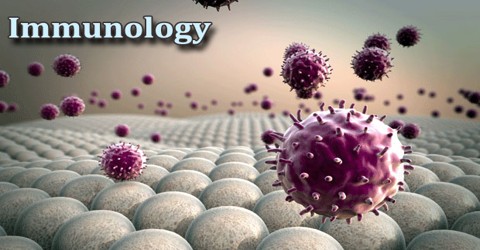 Immunology is the scientific study of the structure and function, blood banking, immunization, and organ transplantation of the immune system. Immunology deals with physical, chemical and physiological characteristics of the components of the immune system in vitro, in situ, and in vivo. It has a vast array of uses in several disciplines of science and medical science.

The key primary lymphoid organs of the immune system are thymus and bone marrow, and secondary lymphatic tissues such as spleen, tonsils, lymph vessels, lymph nodes, adenoids, and skin. In good health thymus, spleen, portions of bone marrow, lymph nodes and secondary lymphatic tissues can be surgically removed without much harm to humans. The actual components of the immune system are cellular in nature and not associated with any specific organ. They are widely present in circulation throughout the body.

The use of immune system components to treat a disease or disorder is known as immunotherapy. Immunotherapy is most commonly used in the context of the treatment of cancers together with chemotherapy (drugs) and radiotherapy (radiation). However, immunotherapy is also often used in the immunosuppressed (such as HIV patients) and people suffering from other immune deficiencies or autoimmune diseases. This includes regulating factors such as IL-2, IL-10, GM-CSF B, IFN-α. Healthy immunity accomplishes four essential principles: (1) ability to detect and fight off infection; (2) ability to recognize a host’s own cells as “self,” thereby protecting them from attack; (3) a memory from previous foreign infections; and (4) ability to limit the response after the pathogen has been removed. In an unaltered state, the intricate network of immunologic organs and cells creates an environment for proper host defense. Without adequate execution of immunologic mechanisms, a host is rendered defenseless against pathogens.

White cells, which are the most common ones are neutrophils, engulf any foreign particles such as dust or bacteria, then digest them and dispose off of the remains. The enzymes used to break invaders down are lysosomes which fuse with the vesicle which contains the bacteria. All this action happens within the white cell. At the end, the undigested leftovers are disposed off of by exocytosis. The specific immune response is split into humoral immunity and cell-mediated immunity. Humoral is to do with the blood and antibodies. Distinguishing between an antigen and an antibody is very important.

Memory cells are specific to certain antigens. The flu virus has many different variations of antigens which change constantly, so by the time we’ve acquired some resistance to this year’s antigen, a new one will have emerged.

Vaccinations prevent symptoms of an illness (such as flu) from developing, by creating a primary immune response to an unharmful substance that the body identifies as a pathogen. This could be an antigen, or the pathogen itself – dead or otherwise modified to prevent disease. Some vaccines are really successful and have prevented many diseases so far, yet the flu vaccine remains a challenge due to the above points. The virus changes its antigens, and there is great variation to start off with.

These are antibodies which can be cloned from a single cell to make a high amount of them. They can bind to pretty much any substance, and are used in pregnancy tests as well as cancer treatment.The process involves taking a cell which produces antibodies such as a lymphocyte, and crossing it with a tumour cell. Tumour cells divide uncontrollably, so the end hybrid cell will produce many antibodies via its many clones. Immunoassays for Disease – Immunoassays are laboratory techniques based on the detection of antibody production in response to foreign antigens.

Antibody Functions – Antibodies, part of the humoral immune response, are involved in pathogen detection and neutralization.

Precipitation Reactions – Precipitation reactions are serological assays for the detection of immunoglobulin levels from the serum of a patient with infection.

More recently, several theoretical frameworks have been suggested in immunology, including “autopoietic” views, “cognitive immune” views, the “danger model” (or “danger theory”), and the “discontinuity” theory. The danger model, suggested by Polly Matzinger and colleagues, has been very influential, arousing many comments and discussions.