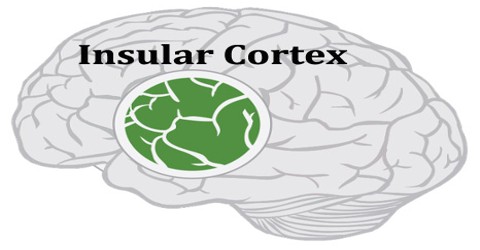 Insular Cortex (IC) may play a role in the integration of visceral reactions and stress. It is a portion of the cerebral cortex folded deep within the lateral sulcus, the fissure separating the temporal lobe from the parietal and frontal lobes. The insulae are believed to be involved in consciousness and play a role in diverse functions usually linked to emotion or the regulation of the body’s homeostasis. These functions include perception, motor control, self-awareness, cognitive functioning, and interpersonal experience. In relation to these, it is involved in psychopathology. The insular cortex lies hidden deep to the lateral sulcus (sylvian fissure), which separates the frontal and parietal lobes dorsally, from the temporal lobe ventrally. The overlying cortical areas formed by the frontal, parietal and temporal lobes are known as opercula (meaning “lids”).

The insula is a sessile irregular pyramid, with its trapezoid base facing medially. The base is circumscribed by the circular sulcus, although more precisely this is formed by four periinsular sulci; anterior, inferior, superior and posterior. Its apex points laterally, into the sylvian fissure. The insular cortex is divided into two lobules, anterior and posterior, by the central sulcus of the insula which passes obliquely from posterosuperiorly to anteroinferiorly.

The insula, Latin for “island” and also called the Island of Reil or the insular cortex is a triangular area of neocortex that lies underneath the lateral (Sylvian) fissure. The insular cortex is not visible on an exterior view of the brain, as it is fully covered laterally by opercula of the parietal, frontal, and temporal lobes. The starting point for a more detailed understanding of functional anatomy in the human is provided by studies in nonhuman primates. It is important to bear in mind, however, that differences are apparent both when comparing across species of nonhumans primates and from nonhumans primates to humans. The insular cortex also is where the sensation of pain is judged as to its degree. Further, the insula is where a person imagines pain when looking at images of painful events while thinking about their happening to one’s own body. Those with irritable bowel syndrome have abnormal processing of visceral pain in the insular cortex related to dysfunctional inhibition of pain within the brain.

It has a number of disparate functions, serving as the primary gustatory cortex, as well as having important connections to language and visual-vestibular integration. Additionally the insula also has important autonomic function, particularly sympathetic tone from the right insula; damage to this area has been associated with cardiac arrhythmias.

It is thought that these functions are not distinct from the “lower” functions of the insula but rather arise as a consequence of the role of the insula in conveying homeostatic information to consciousness. The right anterior insula aids interoceptive awareness of body states, such as the ability to time one’s own heartbeat. Moreover, greater right anterior insular gray matter volume correlates with increased accuracy in this subjective sense of the inner body, and with negative emotional experience.