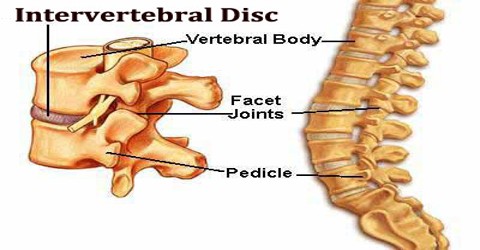 Intervertebral Disc is a broad disk of cartilage that separates adjacent vertebrae of the spine and acts as a shock absorber during movement. It is make up one fourth of the spinal column’s length. There are no discs between the Atlas (C1), Axis (C2), and Coccyx. Discs are not vascular and therefore depend on the end plates to diffuse needed nutrients. The cartilaginous layers of the end plates anchor the discs in place. Intervertebral Discs are fibrocartilaginous cushions serving as the spine’s shock absorbing system, which protect the vertebrae, brain, and other structures (i.e. nerves). The discs allow some vertebral motion: extension and flexion.

Structure and Functions of Intervertebral Disc

There are a total of 24 discs in the human spine. The discs are made of fibrocartilaginous material. The outside of the dick is made of a strong material called the annulus fibrosus. It consists of a thick outer ring of fibrous cartilage called the anulus (derived from the Latin word “anus” meaning ring) or annulus (anulus fibrosus disci intervertebralis), which surrounds an inner gel-like centre or more gelatinous core known as the nucleus pulposus (meaning “pulpy interior”). The nucleus pulposus is sandwiched inferiorly and superiorly by cartilage endplates. The annulus fibrosus is a strong radial tire–like structure made up of lamellae; concentric sheets of collagen fibers connected to the vertebral end plates. The sheets are orientated at various angles. The annulus fibrosus encloses the nucleus pulposus. Inside this protective covering is a jelly-like substance known as mucoprotein gel. The mucoprotein gel loses moisture as a person ages and the spine is able to absorb less shock. The outer layer of annulus fibrosus on the intervertebral disk deteriorates with age and can begin to rip, and this causes chronic back pain for some people.