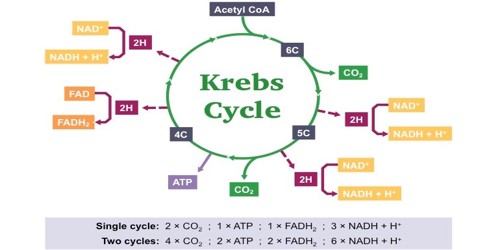 The Krebs cycle (named after Hans Krebs) is a part of cellular respiration. Its other names are the citric acidity cycle, and the tricarboxylic acid cycle (TCA cycle). Carbon dioxide is a gas resulting from decarboxylation reactions and an important ubiquitary source of the catabolite is the Krebs cycle.

The “Krebs cycle” is a series of chemical reactions used by all aerobic organisms in their energy conversion processes. It is a series of enzymatic reactions that occur in all aerobic organisms; it involves the oxidative metabolism of acetyl units and serves as the main source of cellular energy. It is important to many biochemical pathways. This suggests that it was one of the earliest parts of cellular metabolism to evolve. The Krebs cycle uses the two molecules of pyruvic acid formed in glycolysis and yields high-energy molecules of NADH and flavin adenine dinucleotide (FADH2), as well as some ATP.

The Krebs cycle comes after the link reaction and provides the hydrogen and electrons needed for the electron transport chain. If this transfer does not occur, the oxidation steps of the citric acid cycle also do not occur. It takes place inside mitochondria. It occurs in the mitochondrion of a cell. 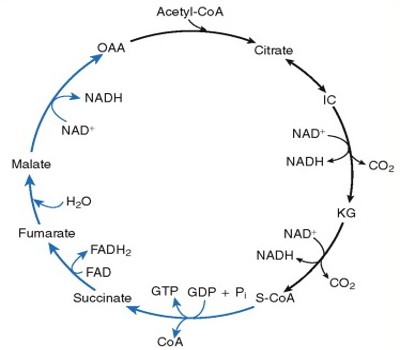 The diagram below shows how this part of respiration is an ever-repeating cycle that produces ATP and gives off CO2. The ATP is a molecule that carries energy in chemical form to be used in other cell processes. In the process, electrons and a hydrogen ion are transferred to NAD to form high-energy NADH. To summarize:

Because two acetyl-CoA molecules are produced from each glucose molecule, two cycles are required per glucose molecule. Acetyl-CoA enters the Krebs cycle by combining it with a four-carbon acid called oxaloacetic acid. Therefore, at the end of two cycles, the products are – two ATP, six NADH, two FADH2 two QH2 (ubiquinol) and four CO2. The combination forms the six-carbon acid called citric acid.