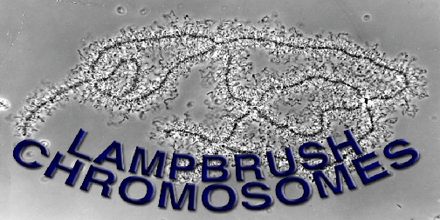 Lampbrush chromosomes are a special form of chromosome found in the growing oocytes of most animals, except mammals. It was given this name because it is similar in appearance to the brushes used to clean lamp chimneys in centuries past. First observed by Flemming in 1882. The name lampbrush was given by Ruckert in 1892. These are found in oocytic nuclei of vertebrates (sharks, amphibians, reptiles and birds)as well as in invertebrates (Sagitta, sepia and several species of insects). Also found in plants – but most experiments in oocytes.