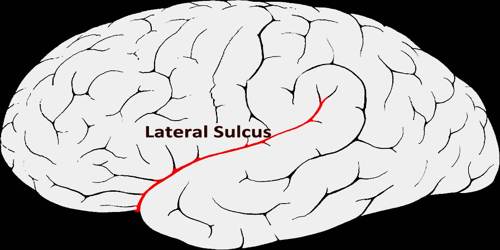 Lateral sulcus is one of the group of sulci and a most prominent brain section. It first arises around the 14th gestational week and originates earlier than all the other structures of the human brain. It is also called Sylvian fissure or lateral fissure. It is the name given to the deepest and largest indentation of the cortical sulci. This indentation was first painted in an accurate manner in 1600 by Girolamo Fabrici d’Acquapendente. The discovery of this structure is attributed to Franciscus Sylvius. The groove is named after this Dutch scientist and physician.

Structure and Functions of Lateral Sulcus

Lateral sulcus can be found in both hemispheres of the brain. It is located at an area that is proximal to the Sylvian point, a region of the human skull that lies closest to the Sylvian fissure and 30 mm behind the Zygomatic process of frontal bone. It looks like a deep, large fissure or indentation. In the left brain hemisphere, it is observed as longer in size.

The lateral sulcus has a number of side branches. Two of the most prominent and most regularly found are the ascending (also called vertical) ramus and the horizontal ramus of the lateral fissure, which subdivide the inferior frontal gyrus. The lateral sulcus also contains the transverse temporal gyri, which are part of the primary and below the surface auditory cortex. This indentation keeps the parietal and the temporal lobes separated. It also contains vital structures, such as:

Partly due to a phenomenon called Yakovlevian torque, the lateral sulcus is often longer and less curved on the left hemisphere than on the right. It is also located near Sylvian Point. The area lying around the Sylvian fissure is often referred to as the perisylvian cortex.

The human secondary somatosensory cortex (S2, SII) is a functionally-defined region of cortex in the parietal operculum on the ceiling of the lateral sulcus.