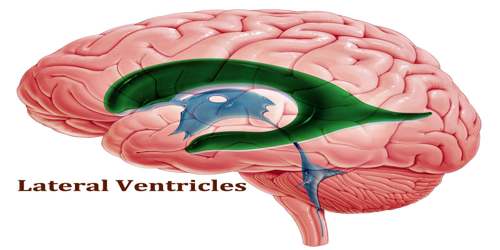 Lateral ventricles are the largest in the series of four interconnecting fluid-filled cavities within the brain. These cavities and theirs interconnecting channels, constitute the cerebral ventricular system. It is a communicating cavity in the brain that is part of a system of four communicating cavities that are continuous with the central canal of the spinal cord. The two lateral ventricles are located in the cerebral hemispheres, one in each hemisphere. Each consists of a triangular central body and four horns. The ventricular system is a well organized interconnecting system spanning every region of the brain. The channels connecting the lateral ventricles to the third (the midline ventricle) are called the interventricular foramen (or foramen of Monro). The cerebral aqueduct connects the third and fourth ventricles. The system is then made continuous with the central canal of the spinal cord, which originates from the floor of the fourth ventricle.

The volume of the lateral ventricles is known to increase with age. They are also enlarged in a number of neurological conditions and are on average larger in patients with schizophrenia, bipolar disorder, major depressive disorder and Alzheimer’s disease.

Structure and Functions of Lateral Ventricles

Each lateral ventricle resembles a C-shaped structure that begins at an inferior horn in the temporal lobe, travels through a body in the parietal lobe and frontal lobe, and ultimately terminates at the interventricular foramina where each lateral ventricle connects to the single, central third ventricle. Along the path, a posterior horn extends backward into the occipital lobe, and an anterior horn extends farther into the frontal lobe. The ventricles produce and contain cerebrospinal fluid (CSF), and the entire surface of the ventricular system is lined by an epithelial layer called the ependyma. Also, there is a vascular pia mater in the roofs of the third and fourth ventricles, and in the medial wall of the lateral ventricle along the line of the choroid fissure. This pia mater is directly apposed to the ependyma, and forms the tela choroidea, which gives rise to the highly vascularised choroid plexuses. The right and left lateral ventricles are structures within the brain that contain cerebrospinal fluid, a clear, watery fluid that provides cushioning for the brain while also helping to circulate nutrients and remove waste.