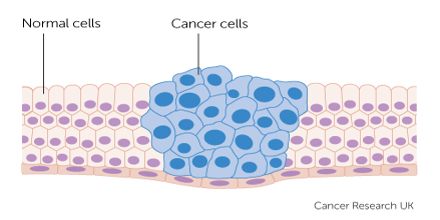 Cancer is one of the most common diseases in the developed world: 1 in 4 deaths are due to cancer and 1 in 17 deaths are due to lung cancer. The aim of this lecture is to present on Cancer. Lung cancer is the most common cancer in men and Breast cancer is the most common cancer in women. There are over 100 different forms of this disease.  The division of normal cells is precisely controlled. New cells are only formed for growth or to replace dead ones. Cancerous cells divide repeatedly out of control even though they are not needed, they crowd out other normal cells and function abnormally.