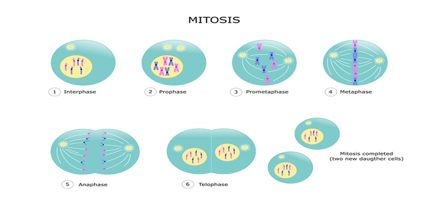 The Aim of this lecture is to present what are the stages of Mitosis. Cell division – process by which cells reproduce; Chromosomes – cell parts that determine what traits a living thing will have; Chromatid – one strand of DNA; after replication, a chromosome is made up of two identical chromatids; Daughter cells – new cells produced by cell division and Cytokinesis – a division of the cytoplasm of one parent cell into 2 daughter cells. Mitosis is the process in which a eukaryotic cell nucleus splits in two, followed by division of the parent cell into two daughter cells.