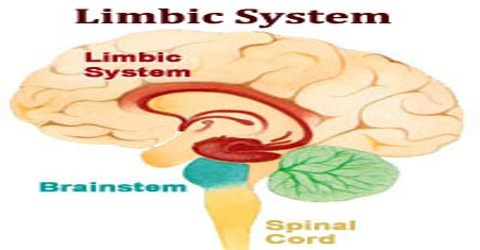 Limbic System is a group of interconnected structures of the brain including the hypothalamus, amydala, and hippocampus that are located beneath the cortex, are common to all mammals, and are associated with emotions such as fear and pleasure, memory, motivation, and various autonomic functions. It is also known as the paleomammalian brain. Limbic system structures are involved in many of our emotions and motivations, particularly those that are related to survival. Such emotions include fear, anger, and emotions related to sexual behavior. The limbic system is also involved in feelings of pleasure that are related to our survival, such as those experienced from eating and sex. The limbic system supports a variety of functions including emotion, behavior, motivation, long-term memory, and olfaction. Emotional life is largely housed in the limbic system, and it has a great deal to do with the formation of memories. It is not a discrete system itself but rather a collection of structures—anatomically related but varying greatly in function.

The cingulate gyrus coordinates smells and sights with pleasant memories induce an emotional reaction to pain, and helps regulate aggressive behavior. The basal ganglia are a group of nuclei lying deep in the subcortical white matter of the frontal lobes; its functions include organizing motor behavior and coordinating rule-based, habit learning.

Structure and Functions of Limbic System Amygdala – almond shaped mass of nuclei involved in emotional responses, hormonal secretions, and memory. The amygdala is responsible for fear conditioning or the associative learning process by which we learn to fear something.

Cingulate Gyrus – a fold in the brain involved with sensory input concerning emotions and the regulation of aggressive behavior.

Fornix – an arching, band of white matter axons (nerve fibers) that connect the hippocampus to the hypothalamus.

Hippocampus – a tiny nub that acts as a memory indexer — sending memories out to the appropriate part of the cerebral hemisphere for long-term storage and retrieving them when necessary.

Hypothalamus – about the size of a pearl, this structure directs a multitude of important functions. It wakes you up in the morning and gets the adrenaline flowing. The hypothalamus is also an important emotional center, controlling the molecules that make you feel exhilarated, angry, or unhappy.

Olfactory Cortex – receives sensory information from the olfactory bulb and is involved in the identification of odors.

Thalamus – a large, dual lobed mass of gray matter cells that relay sensory signals to and from the spinal cord and the cerebrum.

The limbic system is also involved in sensory perception, motor function, and olfaction. It is often classified as a “cerebral structure”. This structure is closely linked to olfaction, emotions, drives, autonomic regulation, memory, and pathologically to encephalopathy, epilepsy, psychotic symptoms, and cognitive defects. The functional relevance of the limbic system has proven to serve many different functions such as affects/emotions, memory, sensory processing, time perception, attention, consciousness, instincts, autonomic/vegetative control, and actions/motor behavior. Some of the disorders associated with the limbic system are epilepsy and schizophrenia. Human emotions are essential and intrinsic to human behaviour. Despite our current knowledge about a wide range of human emotions, there is no consensus in the scientific community about how to define the emotions and on which ones are elemental. Throughout the centuries, various scientists have attempted to elucidate the neural systems that control human emotions and behaviour. Research into human emotions and behaviour is vast and is leading exponentially to more questions, which in turn require solutions. For that to happen successfully, efforts should be put into studies based on behavioural genetics, functional neuroimaging investigations, psychopharmacology, and the emerging field of behavioural neuroscience.