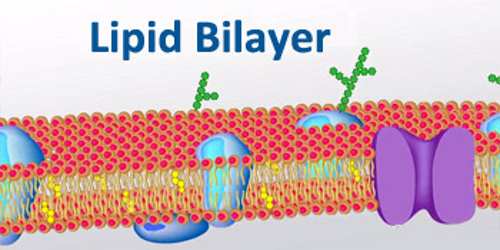 Lipid bilayer is a two-layered arrangement of phosphate and lipid molecules that form a cell membrane, the hydrophobic lipid ends facing inward and the hydrophilic phosphate ends facing outward. Each lipid molecule comprises a hydrophilic ‘head’ (having a high affinity for water) and a hydrophobic ‘tail’ (having a low affinity for water). In the lipid bilayer the molecules are aligned so that their hydrophilic heads face outwards, forming the outer and inner surfaces of the membrane, while the hydrophobic tails face inwards, away from the external aqueous environment. Cells are outlined by a plasma membrane. The plasma membrane is responsible for protecting the interior of the cell and for selective permeability, which means it monitors what materials enter and exit the cell. The ability of the plasma membrane to determine which materials can move in and out of a cell is due to the molecules found in the membrane and the presence of a lipid bilayer.

Biological membranes typically include several types of molecules other than phospholipids. A particularly important example in animal cells is cholesterol, which helps strengthen the bilayer and decrease its permeability. Cholesterol also helps regulate the activity of certain integral membrane proteins. Integral membrane proteins function when incorporated into a lipid bilayer, and they are held tightly to lipid bilayer with the help of an annular lipid shell.

Structure and Functions of Lipid Bilayer

Phospholipids are the primary molecules found in the plasma membrane. A phospholipid is unique in that it has a hydrophilic region called the head, and a hydrophobic region known as the tail. The hydrophilic region can interact with water due to the presence of a phosphate group which is polar, like water. If something is hydrophilic, that means it likes water. Conversely, the hydrophobic region of the molecule does not interact with water because it is not polar. If something is hydrophobic, that means it does not like water. A molecule that has both partial hydrophilicity and partial hydrophobicity is classified as amphipathic. The lipid bilayer is very thin compared to its lateral dimensions. If a typical mammalian cell (diameter ~10 micrometers) were magnified to the size of a watermelon (~1 ft/30 cm), the lipid bilayer making up the plasma membrane would be about as thick as a piece of office paper. Despite being only a few nanometers thick, the bilayer is composed of several distinct chemical regions across its cross-section.

The first region on either side of the bilayer is the hydrophilic headgroup. This portion of the membrane is completely hydrated and is typically around 0.8-0.9 nm thick. In phospholipid bilayers the phosphate group is located within this hydrated region, approximately 0.5 nm outside the hydrophobic core.

The bilayer creates a ‘sandwich’ style arrangement, where the hydrophilic heads of each layer face the watery environment inside and outside of the cell. This means that the hydrophobic tails are confined to the middle, creating a hydrophobic region between the two layers of heads. This allows for the plasma membrane to be stable in this dual watery environment.

In many naturally occurring bilayers, the compositions of the inner and outer membrane leaflets are different. In human red blood cells, the inner (cytoplasmic) leaflet is composed mostly of phosphatidylethanolamine, phosphatidylserine and phosphatidylinositol and its phosphorylated derivatives. By contrast, the outer (extracellular) leaflet is based on phosphatidylcholine, sphingomyelin and a variety of glycolipids. The phospholipid bilayer serves as the main barrier between the cell’s internal components and its extracellular environment, which consists mainly of the cytoplasm. By doing this, it controls and maintains a balance of molecules that are present in the cell, such as proteins and ions. Several proteins exist in the bilayer that help to control what enters and exits the cell. These are often referred to as transmembrane or transporter proteins. The cell alters the gene expression of these proteins to create more or less in response to its need to transport items across the membrane.

Molecules housed on the surface of the bilayer have several other functions in addition to transport. For example, they may serve as communicating molecules, signaling messages between the internal part of the cell and external molecules such as proteins.