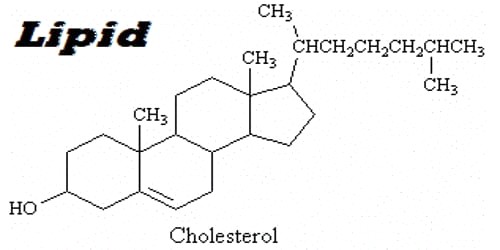 A lipid is a type of organic molecule found in living things. It is oily or waxy. Fats are made from lipid molecules. Sources of lipid can be found in algae, seeds, meat, cheese, butter, and fish. They are an important component of living cells. In the human body, these molecules can be synthesized in the liver and are and generally found in the oil, butter, whole milk, cheese, fried foods, and also in some red meats.

It is chemically defined as a substance that is insoluble in water and soluble in alcohol, ether, and chloroform. Lipids are long chains of carbon and hydrogen molecules. These molecules yield high energy and are responsible for different functions within the human body. Together with carbohydrates and proteins, lipids are the main constituents of plant and animal cells. Lipids are classified as simple and complex. Examples of complex molecules could be steroids or phospholipids.

A very important biological function of lipids is lipid bilayers, the basis of many cell membranes. They are easily stored in the body. They serve as a source of fuel and are an important constituent of the structure of cells. Another function of lipids is to serve as an energy reserve. Lipids can be hydrophobic (non-polar), or amphipathic (containing both polar and non-polar parts). They are not soluble in water as they are non-polar, but are thus soluble in non-polar solvents such as chloroform.

Nonsaponifiable Lipids – It cannot be broken up into smaller molecules by hydrolysis, which includes triglycerides, waxes, phospholipids, and sphingolipids.

Saponifiable Lipids – It contains one or more ester groups allowing it to undergo hydrolysis in the presence of an acid, base, or enzymes. Nonsaponifiable lipids include steroids, prostaglandins, and terpenes.

Lipids are a group of naturally occurring molecules that include fats, waxes, sterols, fat-soluble vitamins (such as vitamins A, D, E, and K), glycerides, phospholipids, and others. Our body needs small amounts of lipids to work normally. The main biological functions of lipids include storing energy, signaling, and acting as components of cell membranes.