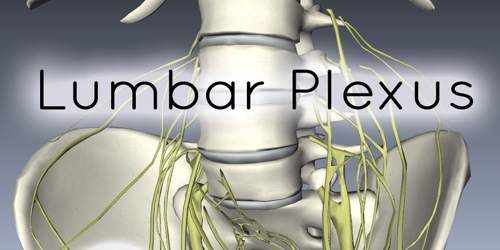 Lumbar plexus is a group of four nerves (L1, L2, L3 and L4) that are located in front of the hip joint and follow the leg down to the thigh. Each of these nerves has specific branches and is associated with particular actions. Each of these labels (L1, L2, L3 and L4) are associated with the vertebrae that the nerve comes from. Additionally, the ventral rami of the fourth lumbar nerve pass communicating branches, the lumbosacral trunk, to the sacral plexus. The nerves of the lumbar plexus pass in front of the hip joint and mainly support the anterior part of the thigh. The plexus is formed lateral to the intervertebral foramina and passes through psoas major. Its smaller motor branches are distributed directly to psoas major, while the larger branches leave the muscle at various sites to run obliquely down through the pelvis to leave under the inguinal ligament, with the exception of the obturator nerve which exits the pelvis through the obturator foramen.

The anterior rami of the L1-L4 spinal roots divide into several cords. These cords then combine together to form the six major peripheral nerves of the lumbar plexus. These nerves then descend down the posterior abdominal wall to reach the lower limb, where they innervate their target structures.

The loops of communication between the first three lumbar levels and the greater portion of the fourth lumbar nerve form the lumbar plexus. The first lumbar nerve, or L1, divides into an upper and lower branch. The upper and bigger branch splits into the ilioingual and iliohypogastric nerves. The lower branch unites with the second lumbar nerve (L2), which – along with L3 and L4 – splits into ventral and dorsal divisions. The iliohypogastric nerve is the first major branch of the lumbar plexus. It runs to the iliac crest, across the quadratus lumborum muscle of the posterior abdominal wall. It then perforates the transversus abdominis, and divides into its terminal branches.

The ilioinguinal nerve follows the same anatomical course as the larger iliohypogastric nerve. After innervating the muscles of the anterior abdominal wall, it passes through the superficial inguinal ring to innervate the skin of the genitalia and middle thigh.

After leaving the psoas major muscle, the genitofemoral nerve quickly divides into a genital branch, and a femoral branch.