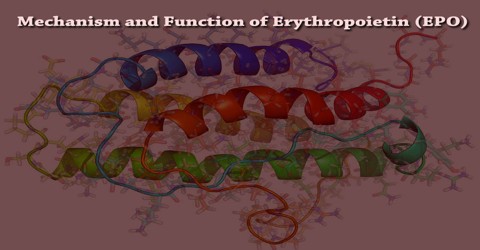 Mechanism and Function of Erythropoietin (EPO)

Mechanism and Function of Erythropoietin (EPO)

Erythropoietin or EPO is the main hemopoietic hormone synthesized by the kidney as well as by the liver in fetal life, is implicated in mammalian erythropoiesis. Production and secretion of EPO and the expression of its receptor (EPO-R) are regulated by tissue oxygenation. EPO can prevent metabolic alterations, neuronal and vascular degeneration, and inflammatory cell activation. Consequently, EPO may be of therapeutic use for a variety of disorders. On the other hand, EPO-R plays no role in tumor progression. Erythropoietin (EPO) is a 30,400 daltons glycoprotein, consisting of 165 amino acids produced mainly in the kidney and in the liver and regulating erythrocyitosis. It primarily acts on erythroid precursor cell at colony-forming units-erythroid stage inhibiting the apoptosis. EPO binds on a specific membrane receptor thereby activating at least three specific intracellular signaling pathways, such as phosphatidylinositol 3-kinase/protein kinase B, Ras-mitogen-activated protein kinase and some members of the signal transducers and activators of transcription family.

Erythropoietin (EPO) increases the number of developing erythroid precursors and accelerates the release of reticulocytes from the marrow without markedly altering the cell cycle length or number of mitotic divisions involved in the differentiation process. Although the hormone has been purified, molecularly cloned and sequenced, its secondary and tertiary structure and active site have not been defined. Erythropoietin has both mitogenic and differentiation functions, and whether an erythroid progenitor cell responds to the hormone by proliferating or differentiating appears to depend on its level of maturation. Erythroid progenitor cells are responsive to a variety of growth and developmental agents but only erythropoietin appears obligatory in vivo for terminal differentiation. EPO is highly glycosylated (40% of total molecular weight), with half-life in blood around five hours. EPO’s half-life may vary between endogenous and various recombinant versions. Additional glycosylation or other alterations of EPO via recombinant technology have led to the increase of EPO’s stability in blood, thus requiring less frequent injections.

The target cells for the action of Epo are committed erythroid progenitor cells, which have specific receptors for the hormone. The Epo receptor is a member of a larger family of hematopoietic growth factor receptors. No known second messenger system has been implicated in signal transduction from the Epo receptor. Although Epo may have some effect on mitosis in early erythroid progenitor cells, its control of RBC production appears to occur in later stages of erythroid cell development, where it prevents programmed cell death.

Erythropoietin or EPO is a type of protein called a growth factor. There are different types; epoetin alfa, beta, zeta, theta and darbepoetin alfa. Erythropoietin (EPO) is an essential hormone for red blood cell production. Without it, definitive erythropoiesis does not take place. Under hypoxic conditions, the kidney will produce and secrete erythropoietin to increase the production of red blood cells by targeting CFU-E, proerythroblast and basophilic erythroblast subsets in the differentiation. Erythropoietin has its primary effect on red blood cell progenitors and precursors, which are found in the bone marrow in humans by promoting their survival through protecting these cells from apoptosis, or cell death.

EPO was reported to have a range of actions beyond stimulation of erythropoiesis including vasoconstriction-dependent hypertension, stimulating angiogenesis, and promoting cell survival via activation of Epo receptors resulting in anti-apoptotic effects on ischemic tissues. In addition some research studies have shown its neuroprotective effect on diabetic neuropathy, however these data were not confirmed in clinical trials that have been conducted on the deep peroneal, superficial peroneal, tibial and sural nerves. The Role of Erythropoietin (EPO)