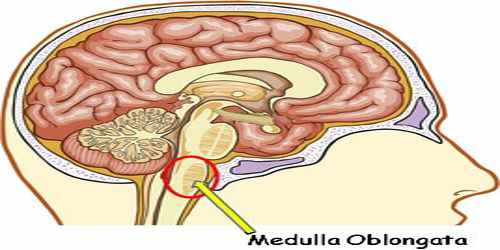 Medulla oblongata is the lowermost portion of the brainstem in humans and other mammals. It is important in the reflex control of involuntary processes, including respiration, heartbeat, and blood pressure. It is a cone-shaped neuronal mass responsible for autonomic (involuntary) functions ranging from vomiting to sneezing. The medulla oblongata, also known just as the medulla, is part of your brainstem, which is literally the stem that extends from our brain. The medulla sits below the pons and above the spinal cord and is a major relay point for information going to and from our brain and spinal cord. In fact, its ‘middle-man’ position is actually reflected in its name, which means ‘elongated’ or ‘oblong’ (oblongata) ‘middle’ (medulla).

Structure and Functions of Medulla Oblongata

Medulla oblongata is connected by the pons to the midbrain and is continuous posteriorly with the spinal cord, with which it merges at the opening (foramen magnum) at the base of the skull. The medulla is divided into two main parts: the ventral medulla and the dorsal medulla; also known as the tegmentu. The ventral medulla contains a pair of triangular structures called pyramids, within which lie the pyramidal tracts. The pyramidal tracts are made up of the corticospinal tract and the corticobulbar tract. In their descent through the lower portion of the medulla (immediately above the junction with the spinal cord), the vast majority (80 to 90 percent) of corticospinal tracts cross, forming the point known as the decussation of the pyramids. The ventral medulla also houses another set of paired structures, the olivary bodies, which are located laterally on the pyramids. The medulla oblongata helps regulate breathing, heart and blood vessel function, digestion, sneezing, and swallowing. This part of the brain is a center for respiration and circulation. Sensory and motor neurons (nerve cells) from the forebrain and midbrain travel through the medulla. The main function of the thalamus is to process information to and from the spinal cord and the cerebellum. Both lampreys and hagfish possess a fully developed medulla oblongata. Since these are both very similar to early agnathans, it has been suggested that the medulla evolved in these early fish, approximately 505 million years ago. The status of the medulla as part of the primordial reptilian brain is confirmed by its disproportionate size in modern reptiles such as the crocodile, alligator, and monitor lizard.