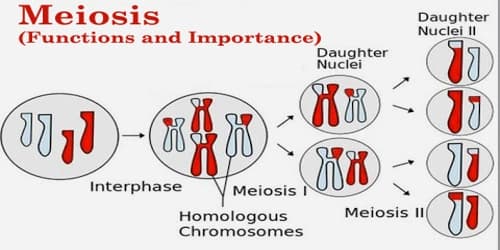 Definition: Meiosis (/maɪˈoʊsɪs/; from Greek μείωσις, meiosis, which means lessening) is the process in eukaryotic, sexually-reproducing animals that reduces the number of chromosomes in a cell before reproduction. Many organisms package these cells into gametes, such as egg and sperm.

The term “meiosis” (originally spelled “maiosis”) is derived from the Greek word μείωσις, meaning ‘lessening’. It was introduced to biology by J.B. Farmer and J.E.S. Moore in 1905:

The term was linguistically corrected to “meiosis” by Koernicke (1905), and by Pantel and De Sinety (1906).

In general, this process involves a “parent” cell splitting into two or more “daughter” cells. In this way, the parent cell can pass on its genetic material from generation to generation.

Cells in the human body have 23 pairs of chromosomes or 46 in total. This includes two sex chromosomes: two X chromosomes for females and one X and one Y chromosome for males. Because each chromosome has a pair, these cells are called “diploid” cells.

On the other hand, human sperm and egg cells have only 23 chromosomes or half the chromosomes of a diploid cell. Thus, they are called “haploid” cells. In meiosis, DNA replication is followed by two rounds of cell division to produce four daughter cells, each with half the number of chromosomes as the original parent cell. The two meiotic divisions are known as Meiosis I and Meiosis II. Before meiosis begins, during S phase of the cell cycle, the DNA of each chromosome is replicated so that it consists of two identical sister chromatids, which remain held together through sister chromatid cohesion.

Meiosis I, the first half of the total cell division process of sexual reproductive cells, has four phases: prophase I, metaphase I, anaphase I and telophase I. Before mitosis or meiosis I begin, all cells go through interphase.

Functions of Meiosis: Meiosis is necessary for many sexually-reproducing animals to ensure the same number of chromosomes in the offspring as in the parents. To understand sex in eukaryotes, it is necessary to understand (1) how meiosis arose in single-celled eukaryotes, and (2) the function of meiosis.

The act of fertilization includes two cells fusing together to become a new zygote. If the number of alleles of each gene is not reduced to 1 in the gametes that produce the zygote, there will be 4 copies of each gene in the offspring. In many animals, this would lead to many developmental defects. In other organisms, polyploidy is common and they can exist with many copies of the same gene. However, if the organism cannot survive if they are polyploidy, meiosis must occur before reproduction. Meiosis occurs in two distinct divisions, with different phases in each. Meiosis is a key event of the sexual cycle in eukaryotes. It is the stage of the life cycle when a cell gives rise to two haploid cells (gametes) each having half as many chromosomes. Two such haploid gametes, arising from different individual organisms, fuse by the process of fertilization, thus completing the sexual cycle.

Importance of Meiosis: Proper “chromosomal segregation,” or the separation of sister chromatids during meiosis I and II are essential for generating healthy sperm and egg cells, and by extension, healthy embryos. If chromosomes fail to segregate completely, it’s called nondisjunction and can result in the formation of gametes that have missing or extra chromosomes.

The most significant impact of meiosis is that it generates genetic diversity, and that’s a major advantage for species survival.