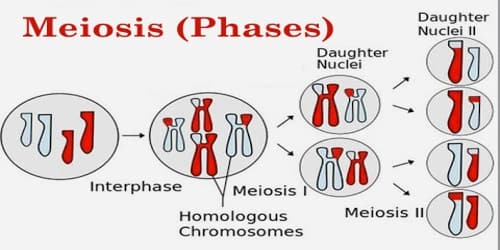 Definition: Meiosis (/maɪˈoʊsɪs/; from Greek μείωσις, meiosis, which means lessening) is a specialized form of cell division that produces reproductive cells, such as plant and fungal spores and sperm and egg cells. This process occurs in all sexually reproducing single-celled and multicellular eukaryotes, including animals, plants, and fungi. Errors in meiosis resulting in aneuploidy are the leading known cause of miscarriage and the most frequent genetic cause of developmental disabilities.

In general, this process involves a “parent” cell splitting into two or more “daughter” cells. In this way, the parent cell can pass on its genetic material from generation to generation.

A diploid parent cell, which has two complete sets of chromosomes (22 pairs of numbered chromosomes and one pair of sex chromosomes), divides twice to produce four daughter cells that are haploid and each contains half the DNA of the original parent cell before cell division.

The term “meiosis” (originally spelled “maiosis”) is derived from the Greek word μείωσις, meaning ‘lessening’. It was introduced to biology by J.B. Farmer and J.E.S. Moore in 1905:

The term was linguistically corrected to “meiosis” by Koernicke (1905), and by Pantel and De Sinety (1906)

When the sperm and egg combine during fertilization, the total chromosome number is restored. That’s because sexually reproducing organisms receive a set of chromosomes from each parent: a maternal and paternal set. Each chromosome has a corresponding pair, orhomolog.

Meiosis is split into two distinct cycles, I and II, each with its own phases or stages of cell division. Each cycle contains phases, as in mitosis, and each phase is labeled with a number to indicate which cycle it belongs to. For example, meiosis I have prophase I and anaphase I, while meiosis II has prophase II and anaphase II.

Meiosis uses many of the same mechanisms as mitosis, the type of cell division used by eukaryotes to divide one cell into two identical daughter cells. In some plants, fungi, and protists meiosis results in the formation of spores: haploid cells that can divide vegetatively without undergoing fertilization. Some eukaryotes, like bdelloid rotifers, do not have the ability to carry out meiosis and have acquired the ability to reproduce by parthenogenesis.

Phases of Meiosis: Before meiosis, the DNA is replicated, as in mitosis. Meiosis then consists of two cell divisions, known as meiosis I and meiosis II. In the first division, which consists of different phases, the duplicated DNA is separated into daughter cells. In the next division, which immediately follows the first, the two alleles of each gene are separated into individual cells. Phases of Meiosis I: The four stages of meiosis are as follows, according to “Molecular Biology of the Cell.”

Two new cells, each haploid in their DNA, but with 2 copies, are the result of meiosis I. Again, although there are 2 alleles for each gene, they are on sister chromatid copies of each other. These are therefore considered haploid cells. These cells take a short rest before entering the second division of meiosis, meiosis II. Phases of Meiosis II: Meiosis II is the second meiotic division, and usually involves equational segregation, or separation of sister chromatids. Mechanically, the process is similar to mitosis, though its genetic results are fundamentally different. The end result is the production of four haploid cells (n chromosomes, 23 in humans) from the two haploid cells (with n chromosomes, each consisting of two sister chromatids) produced in meiosis I.

The four main steps of meiosis II are:

At the end of meiosis II, there are 4 cells, each haploid, and each with only 1 copy of the genome. These cells can now be developed into gametes, eggs in females and sperm in males.