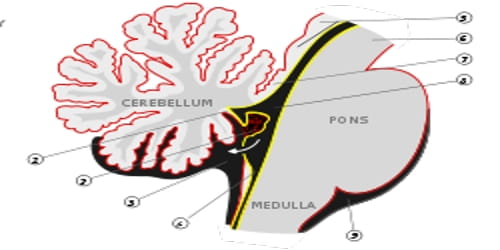 Specifically, the metencephalon is considered part of the central nervous system (CNS), which receives and processes data for regulating the activity of the parts of the body. This is because it is one of the components of the brain, which, along with the spinal cord and other components, comprises most of the nervous system.

Structure and Function of Metencephalon: The metencephalon has two major components: pons and cerebellum. Pons – The part of the metencephalon located on the brain stem that forms a bulge on the brain stem’s ventral surface. It is involved in motor control and sensory analysis, acting as the sensory/motor relay center.

The dorsal part of the pons, known as pontine tegmentum, extends from the ventral pons to the fourth ventricle. Cerebellum – The “cauliflower” piece in the back of the brain that is responsible for sensorimotor function (the part that helps regulate posture, balance, and coordination). Think of the “practice makes perfect” theory of sports, for example.

The cerebellum is divided into a median region, termed the vermis, and bilateral cerebellar hemispheres. The cerebellar surface is partitioned into folia (folium = ridge) separated by sulci (sulcus = groove).

Although the metencephalon surely plays a role in the precise movements of the tongue and lips required for language production, it is generally an unimportant structure with regard to the study of language and the brain.

Reticular formation – The reticular formation is comprised of 2 columns of neuronal nuclei with ill-defined boundaries, which go up through the medulla and into the mesencephalon. The reticular formation plays a role in arousal and regulates your sleep/wake cycle. It is also associated with habituation (example – able to tune out background noise), somatic motor control (tone, balance, and posture), cardiovascular regulation and pain modulation.

There are other parts of the metencephalon as well. The structure holds a part of one of the brain’s four fluid-filled cavities called the fourth ventricle. It also contains a portion of the fifth, sixth, seventh and eighth cranial nerves. These nerves are referred to the trigeminal, abducens, facial and vestibulocochlear nerves.