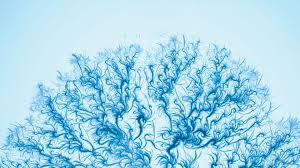 Microbial intelligence (popularly known as bacterial intelligence) is the intelligence shown by microorganisms. The concept encompasses complex adaptive behavior shown by single cells, and altruistic and/or cooperative behavior in populations of like or unlike cells mediated by chemical signaling that induces physiological or behavioral changes in cells and influences colony structures.

Complex cells, like protozoa or algae, show remarkable abilities to organize themselves in changing circumstances. Shell-building by amoebae, reveals complex discrimination and manipulative skills that are ordinarily thought to occur only in multicellular organisms.

It has been suggested that a bacterial colony loosely mimics a biological neural network. The bacteria can take inputs in form of chemical signals, process them and then produce output chemicals to signal other bacteria in the colony.

Bacteria communication and self-organization in the context of Network theory has been investigated by the Eshel Ben-Jacob research group at Tel Aviv University which developed a fractal model of the bacterial colony and identified linguistic and social patterns in colony lifecycle.

The algorithm is based on a lifecycle model that simulates some typical behaviors of E. coli bacteria during their whole lifecycle, including chemotaxis, communication, elimination, reproduction, and migration.