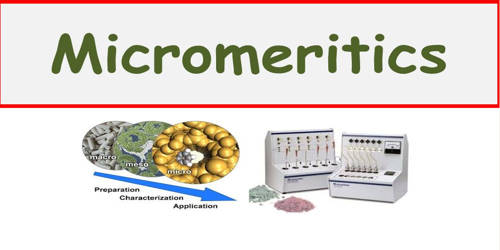 Micromeritics is a field of science that deals with small particles and that is applied especially in soil physics. The term micromeritics was given to the science and technology of small particles by J. M. DallaValle. It is the science and technology of small particles. The word Micromeritics refers to a discipline of science and technology that deals with studies related to the fundamental as well derived properties of particles. It is thus the study of the fundamental and derived properties of individual as well as a collection of particles. A precise knowledge of the particle size is of supreme importance in the pharmaceutical and materials science. The knowledge and control of the size of particles is of importance in pharmacy and materials science. The size, and hence the surface area of a particle, can be related to the physical, chemical and pharmacologic properties of drugs. It is related directly to the physical, chemical, as well as pharmacological characteristics of an active pharmaceutical ingredient (API).

Clinically, the particle size of a drug can affect its release from dosage forms that are administered orally, parenterally, rectally and topically. Accurate determination of particle size has thus become a critical operation in industries and research and development sectors. The successful formulation of suspensions, emulsions and tablets; both physical stability and pharmacologic response also depends on the particle size achieved in the product. Knowledge and control of the size and the size range of particles are of significant importance in pharmacy because of the size and surface area of a particle related to the physical, chemical and pharmacologic properties of a drug.

Particle size and surface area influence the release of a drug from a dosage form that is administered orally, rectally, parenterally, and topically. The higher surface area brings about intimate contact of the drug with the dissolution fluids in vivo and increases the drug solubility and dissolution.

Particle size and surface area influence the drug absorption and subsequently the therapeutic action. The higher the dissolution, the faster the absorption and hence the quicker and greater the drug action.