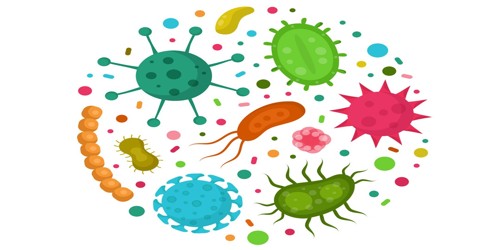 A microorganism or microbe is an organism that is microscopic, which means so small that people cannot see them with a naked eye. The major groups of microorganisms—namely bacteria, archaea, fungi, algae, protozoa, and viruses. These microorganisms have been often under-appreciated and under-studied. They help in the production of many food items, making medicines, keeping the environment clean, in manufacturing and in research.

Microorganisms include bacteria, fungi, archaea, protists and viruses, and are among the earliest known life forms. The first of these four types of microorganisms may either be free-living or parasitic. Viruses can only be parasitic since they always reproduce inside other living things. Microorganisms live in water, in soil, and on the skin and in the digestive tracts of animals. While the most familiar microorganisms are harmful, such as the flu and the common cold, many microorganisms are incredibly helpful. They have uses everywhere from agriculture to cutting-edge medical technology.

Most micro-organisms are single-celled, or unicellular organisms, but there are unicellular protists that are visible to the human eye, and some multicellular species are microscopic.

Microorganisms live almost everywhere on earth where there is liquid water, including hot springs on the ocean floor and deep inside rocks within the earth’s crust. Such habitats are lived in by extremophiles. Microorganisms play a very important role in maintaining the fertility of the soil. They help in the composting process which forms manure.

Microorganisms are critical to nutrient recycling in ecosystems because they act as decomposers. Because some microorganisms can also take nitrogen out of the air, they are an important part of the nitrogen cycle. Bacteria and fungi are required to maintain a healthy environment. Bacteria help in fermentation which helps in making different forms of dairy products from milk like curd, buttermilk, butter, cheese. Bacteria are the first line of defense the human body has against infection. The bacteria in our bodies produce natural antibiotics to repel harmful microorganisms. Pathogenic, or harmful, microbes can invade other organisms and cause disease.