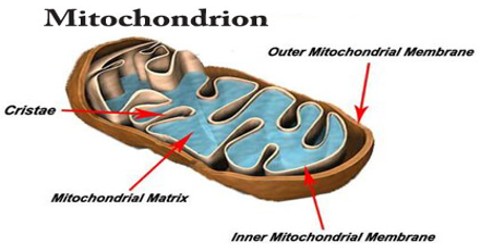 Mitochondrion is regarded as the powerhouse of eukaryotic cells. That is because it is the organelle that supplies energy by generating adenosine triphosphate (ATP) through cellular respiration. Mitochondria are typically round to oval in shape and range in size from 0.5 to 10 μm. In addition to producing energy, mitochondria store calcium for cell signaling activities, generate heat, and mediate cell growth and death. The number of mitochondria per cell varies widely; for example, in humans, erythrocytes (red blood cells) do not contain any mitochondria, whereas liver cells and muscle cells may contain hundreds or even thousands. The mitochondrion consists of outer and inner membranes, an intermembrane space, the cristae, and the matrix. The outer membrane contains several porins that form channels where certain molecules can freely diffuse. Unlike the outer membrane, the inner membrane does not contain porins and is highly impermeable to all molecules. Most ions and molecules would need special membrane transporters to enter or exit the matrix. The cristae, which are the foldings of the inner membrane, increase the surface area thereby increasing ATP production. The matrix contains enzymes, mitoribosomes, tRNA, and DNA. The mitochondrial DNA is genetically distinct from that in the nucleus.

Although most of a cell’s DNA is contained in the cell nucleus, the mitochondrion has its own independent genome that shows substantial similarity to bacterial genomes. Mitochondrial proteins (proteins transcribed from mitochondrial DNA) vary depending on the tissue and the species. In humans, 615 distinct types of protein have been identified from cardiac mitochondria, whereas in rats, 940 proteins have been reported. The mitochondrial proteome is thought to be dynamically regulated. Structure and Function of Mitochondrion

This perspective of the structure of a mitochondrion is modeled after a perspective in Audesirk & Audesirk. It depicts an individual, sausage-shaped mitochondrion, which are typically 1 to 4μ long. There is a great variety in structure including tubular structures with multiple branches. They can divide by fission and fuse into complex structures. Karp has electron micrographs of several varieties. The common elements include an outer membrane that is porous, penetrated by integral proteins called porins. They also include much less porous inner membranes formed in double-layered membranous sheets called cristae.

There are five distinct parts to a mitochondrion. They are:

Mitochondria stripped of their outer membrane are called mitoplasts.

The main function of mitochondria is the production of energy during the production of adenosine triphosphate (ATP) via the TCA Cycle, which is also as the Krebs Cycle and the Citric Acid Cycle. That process is an important metabolic pathway. Mitochondria are often referred to as the powerhouse of the cell. They are small structures within a cell that are made up of two membranes and a matrix. The membrane is where the chemical reactions occur and the matrix is where the fluid is held. Mitochondria are a part of eukaryotic cells. It is to perform cellular respiration. This means it takes in nutrients from the cell, breaks it down, and turns it into energy. This energy is then in turn used by the cell to carry out various functions. Mitochondria play a central role in many other metabolic tasks, such as:

Some mitochondrial functions are performed only in specific types of cells. For example, mitochondria in liver cells contain enzymes that allow them to detoxify ammonia, a waste product of protein metabolism. A mutation in the genes regulating any of these functions can result in mitochondrial diseases.