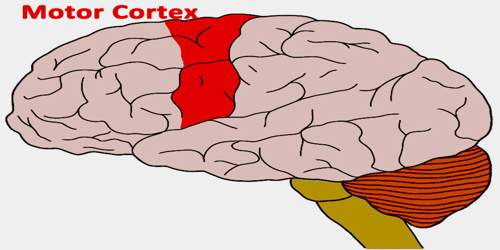 Motor cortex is the region of the cerebral cortex influencing movements of the face, neck and trunk, and arm and leg. It is the region of the cerebral cortex involved in the planning, control, and execution of voluntary movements. It is located in the posterior part of the frontal lobe or frontal cortex, just anterior to somatosensory cortex. Motor cortex includes a primary area, M1, where electrical stimulation of neurons evokes muscle contractions at low levels of current. M1 is characterized by large pyramidal or Betz cells and the lack of an obvious layer 4 of granular cells. Thus, M1 is referred to as agranular cortex and as area 4 of Brodmann’s classical terminology.

In 1870 Eduard Hitzig and Gustav Fritsch demonstrated that electrical stimulation of certain parts of the dog brain resulted in muscular contraction on the opposite side of the body.

A little later, in 1874, David Ferrier, working in the laboratory of the West Riding Lunatic Asylum at Wakefield (at the invitation of its director, James Crichton-Browne), mapped the motor cortex in the monkey brain using electrical stimulation. He found that the motor cortex contained a rough map of the body with the feet at the top (or dorsal part) of the brain and the face at the bottom (or ventral part) of the brain. After Ferrier’s discovery, many neuroscientists used electrical stimulation to study the map of the motor cortex in many animals including monkeys, apes, and humans.

The motor cortex region is responsible for all voluntary muscle movements, like taking a drink of water or getting ourself out of bed in the morning. Scientists divide the motor region into three main parts: the primary motor cortex, the supplementary motor cortex and the premotor cortex. Components of the Motor Cortex

Every voluntary movement you make is controlled through the primary motor cortex (PMC), which is located in the back of the frontal lobe, just about at the top of our head. Signals in our brain are sent to the muscles, telling them to make a movement. The prefrontal cortex sends signals to the premotor cortex, the part of our brain that helps with muscle control. These signals are finally sent to the primary motor cortex, the big boy of this group, responsible for making the muscles move and work together.

The supplementary motor area (or SMA), has many proposed functions including the internally generated planning of movement, the planning of sequences of movement, and the coordination of the two sides of the body such as in bi-manual coordination. Located on the midline surface of the hemisphere anterior to the primary motor cortex. The functional domain of the motor cortex is largely divided into the primary (MOp) and secondary (MOs) motor cortices which play central and modulatory roles, respectively.

Enhancements to the motor cortex and the presence of opposable thumbs and stereoscopic vision were evolutionarily selected to prevent primates from making mistakes in the dangerous motor skill of leaping between tree branches. As a result of this pressure, the motor system of arboreal primates has a disproportionate degree of somatotopic representation of the hands and feet, which is essential for grasping.