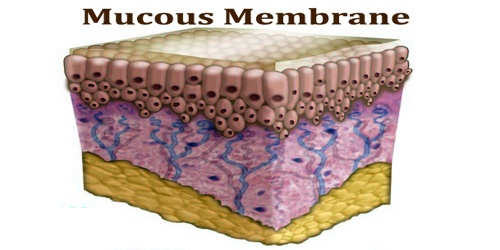 Mucous membrane is any of the membranes lining the passages of the body, such as the respiratory and digestive tracts, that open to the outside. Cells in the mucous membranes secrete mucus, which lubricates the membranes and protects against infection. It is mostly of endodermal origin and is continuous with the skin at various body openings such as the eyes, ears, inside the nose, inside the mouth, lip, the urethral opening and the anus, frenulum of tongue, tongue. Mucous is the adjectival form of the more familiar noun, mucus. In other words, mucous is actually the action or ability to make mucus, the yucky stuff we blow into Kleenex. There are mucous cells, mucous fluid, mucous membranes, and mucous glands. They are all different objects that can secrete mucus. Mucus is the slimy substance that can be found in our respiratory system, digestive system, and reproductive system. Although it has a tendency to be highly annoying – especially during changes in weather – mucus is actually used to protect our bodies from the outside world.

Structure and Functions of Mucous Membrane

Mucous membranes line many tracts and structures of the body, including the mouth, nose, eyelids, trachea (windpipe) and lungs, stomach and intestines, and the ureters, urethra, and urinary bladder. Developmentally, the majority of mucous membranes are of endodermal origin. Exceptions include the palate, cheeks, floor of the mouth, gums, lips and the portion of the anal canal below the pectinate line, which are all ectodermal in origin. They are composed of one or more layers of epithelial cells that secrete mucus, and an underlying lamina propria of loose connective tissue. The type of cells and type of mucus secreted vary from organ to organ and each can differ along a given tract. The term mucous membrane comes from the fact that the major substance secreted from the membranes is mucus; the principal constituent of mucus is a mucopolysaccharide called mucin.

Mucous membranes are found where outside invaders are able to get into our bodies. They secrete mucus as protection from potentially harmful invaders such as bacteria, viruses, or outside matter that can mess up our systems. The mucus from these layers can trap and remove invaders. Some mucus even contains antibodies that help to detect the different viruses and bacteria and send for back up from the rest of the body’s immune system. The mucus that is secreted by mucous objects lies on top of the tissues to not only protect it from invaders but also to keep the underlying tissue from drying out. If the tissue becomes dry, it becomes more fragile and can cause the organ to malfunction. Each system that produces mucus also uses mucus for its own purposes.