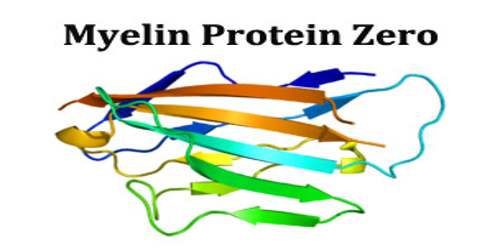 Myelin protein zero (PO, MPZ) is a glycoprotein which in humans is encoded by the MPZ gene. This gene is specifically expressed in Schwann cells of the peripheral nervous system and encodes a type I transmembrane glycoprotein that is a major structural protein of the peripheral myelin sheath. The encoded protein contains a large hydrophobic extracellular domain and a smaller basic intracellular domain, which are essential for the formation and stabilization of the multilamellar structure of the compact myelin. It has been shown to interact with peripheral myelin protein 22. Myelin protein zero (MPZ) genes provide instructions for making a protein called myelin protein zero. It is the most abundant protein in myelin, a protective substance that covers nerves and promotes the efficient transmission of nerve impulses. Specialized cells called Schwann cells, which wrap around and insulate nerves, are the only cells that make myelin protein zero. Schwann cells are part of the peripheral nervous system which connects the brain and spinal cord to muscles and to sensory cells that detect sensations such as touch, pain, heat, and sound. Myelin protein zero is required for the proper formation and maintenance of myelin. This protein is an adhesion molecule, which means it acts like molecular glue. It plays a role in tightly packing the myelin around nerve cells (myelin compaction). It comprises a large extracellular N-terminal domain, a single transmembrane region, and a smaller positively charged intracellular domain. It is postulated that P0 is a structural element in the formation and stabilisation of peripheral nerve myelin, holding its characteristic coil structure together by the interaction of its positively charged domain with acidic lipids in the cytoplasmic face of the opposed bilayer, and by interaction between hydrophobic globular `heads’ of adjacent extracellular domains.

Some MPZ gene mutations cause a severe form of type 1B Charcot-Marie-Tooth disease.