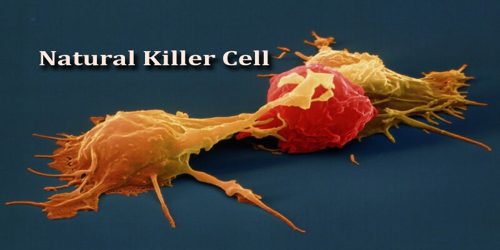 Natural killer cell is a cell that can react against and destroy another cell without prior sensitization to it. It is a small killer cell that destroys virus-infected cells or tumor cells without activation by an immune system cell or antibody. It is also known as NK cells, K cells, and killer cells, which are a type of lymphocyte (a white blood cell) and a component of innate immune system. NK cells are part of our first line of defense against cancer cells and virus-infected cells. NK cells are small lymphocytes that originate in the bone marrow and develop without the influence of the thymus. An NK cell attaches to a target cell, releases chemicals that breach its cell wall, and cause it to lyse (break up).

NK cell receptors, which play roles in maintaining self-tolerance and sustaining NK cell activity. NK cells also play a role in the adaptive immune response. Numerous experiments have demonstrated their ability to adjust to the immediate environment and formulate antigen-specific immunological memory. The ability for NK cells to act in both innate and adaptive immune response is becoming increasingly important in research utilizing NK cell activity in potential cancer therapies.

NK cell receptors can also be differentiated based on function. Natural cytotoxicity receptors directly induce apoptosis after binding to ligands that directly indicate infection of a cell. The MHC dependent receptors (described above) use an alternate pathway to induce apoptosis in infected cells. Natural killer cell activation is determined by the balance of inhibitory and activating receptor stimulation; for example, if the inhibitory receptor signaling is more prominent, then NK cell activity will be inhibited. Similarly, if the activating signal is dominant, then NK cell activation will result. Natural killer (NK) cells are technically lymphocytes; a lot about them distinguishes them from other cells in this group. They mature in the bone marrow instead of the thymus like other T cells. T cells use CD4 or CD8 on their surface membrane to identify a specific cell infected with a pathogen. Each T cell is limited to identifying only targets that match with their surface receptors.

NK cells do not rely on the memory of exposure to a specific pathogen, known as ‘immunity’, to attack an intruder. This immune system superhero has a utility belt filled with secret weapons called perforin and granzymes. They are hidden away inside the large NK cells within granules. When the NK cell meets its nemesis it binds to it and releases perforin and granzymes, which puncture holes in the membrane of the tumor cell or cell infected with the virus. This results in cell death by apoptosis. Functions of NK cells include:

NK cells are activated in response to interferons or macrophage-derived cytokines. They serve to contain viral infections while the adaptive immune response is generating antigen-specific cytotoxic T cells that can clear the infection.